GTA Wiki
Register
Don't have an account?
Sign In
Advertisement
in: Businesses, Businesses in GTA IV, Locations in GTA IV in Broker,
and 6 more
English

Mohawk Avenue, Hove Beach, Broker
“Don't try ordering caviar at this tough Russian hangout in Hove Beach or you might end up with a permanent smile on your face.”
— GTA IV Manual Description

It is located in Mohawk Avenue, (directly opposite the Broker Safehouse), Hove Beach, Broker, Liberty City and is popular with the local Russian immigrant population.

The bar was owned by Vladimir Glebov before his death and is the base for his missions in Grand Theft Auto IV, while Mickey works as a bartender there. Early on in the game, the bar is close to being closed down due to customers smoking in the bar. A baseball bat can also be found at the back of the bar.

Roman is uneasy being taken to the bar early on in the game, due to the possibility of meeting Vlad, but upon leaving becomes more confident. If Niko takes him to the bar after Vlad has been killed, he says that they will raise their glasses to the late Vlad while they drink.

Due to the realignment of the elevated subway track above Mohawk Avenue, the Comrades Bar's frontage is not visible in the Grand Theft Auto: Chinatown Wars rendition of Liberty City in daytime. It is only at night that it is easily visible due to its glowing neon sign.

The interior of the bar, accessible during Uncle Vlad and Ivan The Not So Terrible, features various references to previous GTA titles, including postcards from Grand Theft Auto: Vice City behind the bar, albums by OG Loc, Madd Dogg and Rudy LaFontaine in the jukebox, a framed picture of Vladimir Glebov near the back door, and dollar bills emblazoned with the prostitute on the Grand Theft Auto: San Andreas box art behind the bar. There is also a Russian flag hanging on the ceiling and an unusable pool table. 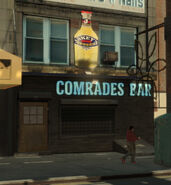 Comrades Bar in GTA Chinatown Wars at night. An edited save game was used in order to obtain this view.