In-game time
“Franklin heads to Rockford Hills to repo a car for Simeon.”

“I appreciate a kid who follows orders without taking responsibility. Maybe one day we'll have a beer, and I'll explain how the world really works.”
— Michael De Santa

Simeon is seen arranging a deal with Mr. Kenneth in the front parking lot right outside his dealership from 8:00 to 18:00. Simeon orders Franklin to repossess a yellow Karin BeeJay XL that Jimmy De Santa bought from him from the De Santa Residence. Before arriving at the house, Simeon will call Franklin, showing his anger after failing to deliver the Bagger from the previous mission. Upon arriving, Franklin knocks out the gardener and proceeds to sneak into the house. Franklin needs to navigate the house stealthily to avoid alerting its residents, passing through the kitchen, and entering the garage to steal the SUV. Franklin manages to successfully steal the SUV and drives away from the house back to the dealership. Suddenly Michael, who was hidden in the SUV's backseat, points a gun at Franklin's head and threatens him, asking him who he is working for and ordering him to continue driving back towards the dealership. Franklin stops near the dealership, and Michael then orders him to drive through the dealership window. A short cutscene plays where Michael quickly gives Franklin some cash and tells him to leave the scene. The player, now controlling Michael, then has to beat up Simeon. After sufficiently beating Simeon enough, another cutscene is triggered. Michael orders Simeon to leave his son alone and then threatens him not to cross him again.

"Traffic accidents are common enough in Los Santos. Traffic accidents involving parked cars are not uncommon. Traffic accidents involving cars parked inside a dealership are still unusual, however, but that is just what happened yesterday in Pillbox Hill. A deranged or possibly drunk joyrider drove his car straight into the showroom of Premium Deluxe Motorsport. The owner, Mr. Simeon Yetarian, was injured in the accident, but the driver fled the scene before cops could get there. Mr. Yetarian told our reporter "I am a well-known philanthropist and charity worker as well as an excellent car dealer. Therefore I can only say it is greatly unfortunate that a chubby alcoholic would consider my showroom an acceptable place to crash his car. I am hoping given all the work I do in the community and especially for race relations that the city will help me pay for the damage." A spokesman for the city commented "we have no comment at this time."

"Car carnage in Pillbox Hill. A car dealership in Pillbox Hill was destroyed, when a joyrider, smashed into the showroom. Premium Deluxe Motorsport has come under investigation for loan scams and high interest rate financing. But the owner, Simeon Yetarian, assured police, that this incident was purely an accident, and not a disgruntled customer. One man witnessed the carnage. "It was crazy as hell, that dude must've been tweakin', I know I am. You got a washing machine I could take apart?"

Franklin setting off to Michael's house.

Franklin getting a call from Simeon about the bike from Repossession.

Simeon telling Franklin how to enter.

Knocking out the gardener.

Franklin climbing through the window.

Franklin sneaking past Amanda and her coach.

Franklin taking the car from the garage.

Michael sneaking up on Franklin.

Franklin and Michael arriving at Simeon's.

The car breaking through the window.

The player can now play as Michael and can now use Michael's mansion as a safehouse. In addition, the strip club, cinemas, the fairground, golf, and tennis are unlocked. 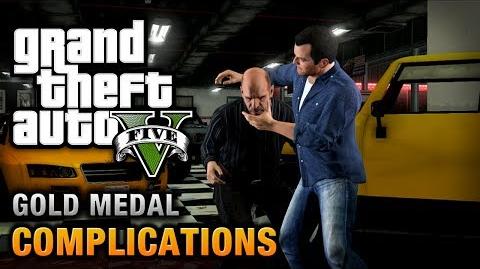 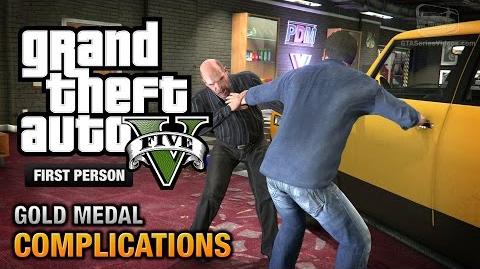 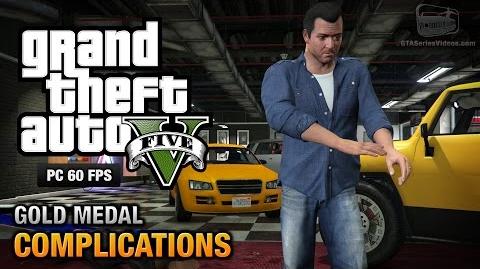