No
“Is there nothing the Pfister Comet cannot do? If you were a venture capitalist looking for the shortest route to your next midlife crisis, the Comet was your first and only choice. If you wanted something that preserved the classic reek of desperation but added a street-racer twist, the Retro Custom was top of the list. And now, if you're looking for something to slam around a hairpin bend in three feet of uphill mud, the Comet Safari has got you covered
Please note: Weapon modifications can only be applied at a Vehicle Workshop inside an Avenger or Mobile Operations Center.
”
— Legendary Motorsport description.

The Pfister Comet Safari is a custom off-road vehicle featured in Grand Theft Auto Online as part of the Doomsday Heist update.

The Comet Safari appears as an off-road version of the Comet, which assumes the same bodywork design as the Comet Retro Custom. The front of the car features an off-road reinforced bumper with a central intake, small lamps, plastic strips and numerous circular vents, together with four circular high-beam lamps. The front boot serves as storage for the racing fuel cell with various components around it, including the strut brace. The sides of the car assume a more traditional design, featuring flared arches and plastic strips on the skirting area. The greenhouse area retains the same features as the Comet Retro Custom. The rear of the car shares the same vented compartment and tail lamps as the Comet Retro Custom, but features an off-road reinforced bumper, complete with black protective frames, circular vents, rear hooks, white lights and a sump guard.

The interior of the car was extensively modified with race components, which were borrowed from the options available for the Comet Retro Custom. These options are: Flocked Dash & Striped interior, Mk2 Race Display & Gauges, Carbon Panel Doorcards, Carbon Track Seats and Rally Professional steering wheel.

Colour distribution is similar to the Comet Retro Custom, where the primary one is applied on the body and the stitching, while the secondary one is applied in the front boot, the cabin and part of the rear engine compartment. Although not accessible, a trim colour is also present on the seats, which is set to black in purchased examples. The stock rims are an off-road derivative of the ones from the Comet Retro Custom, being a variant of the "Ruff Weld" sport rims available at Los Santos Customs, wrapped in Atomic high-profile tyres with detailed tread pattern, similar to the Tropos Rallye and Omnis. These rims can also support a dedicated colour, although only models generated in the Content Creator may have one.

The Comet Safari appears to have a mixed performance of its Custom model and the Brawler. While it is not particularly fast, it can be still a competitive option for off-road racing, as the suspension gives it better capacity to sort uneven terrain with ease. Due to it being in the Sports class, it is able to rival the Omnis and Tropos Rallye in offroad performance, making it a wise purchase for racing. The lifted suspension makes it prone to rollovers after hitting a sizeable bump, though.

Like the Comet Retro Custom, the Comet Safari sports a flat 6 (also known as a boxer 6) engine with a 5-speed gearbox and an all-wheel-drive layout, and its engine sound is a hybrid of the Retro Custom version and Verlierer engines. Unlike its Custom counterpart, the vehicle's engine features fully-animated timing belt and pulleys.

Machine Gun: The vehicle can be equipped with two front-facing machine guns operated by the driver, which perform the same as those of vehicles like the Blazer Aqua and the Ruiner 2000. They have decent firepower against players and vehicles with none or light armor, but will struggle against heavily-armored vehicles.

The Comet Safari can be modified at Los Santos Customs and other mod shops, although the camo liveries and weapons can only be accessed by a Vehicle Workshop inside a Mobile Operations Center or Avenger. 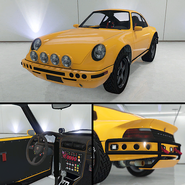 The Comet Safari on Legendary Motorsport.

The Comet Safari on the updated Rockstar Games Social Club.

The Comet Safari in a Cinematic preview on Rockstar Games Social Club.

The Comet Safari with the "It's a Wrap" livery. (Rear quarter view) 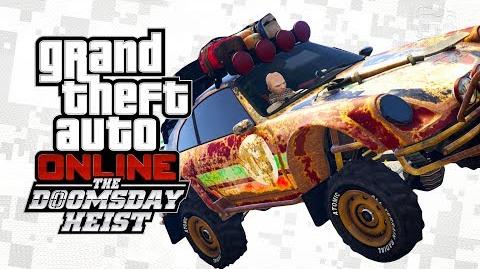