View source
watch 02:56
Raise a Floppa - The Loop
Do you like this video?
Play Sound
Not to be confused with the Comet S2.

Standard White - 100%
“Forget everything you think you know about the Pfister Comet. Forget cruising through Vinewood with a bellyful of whiskey dropping one-liners about the size of your bonus. Forget picking up sex workers and passing them off as your fiancé at family gatherings. The SR was made for only one thing: to make every other sports car look like it's the asthmatic kid in gym. Now get in line.”
— Legendary Motorsport description.

The Pfister Comet SR is a sports car featured in Grand Theft Auto Online as part of the The Doomsday Heist update, released on February 27th, 2018, during the GTA Online Bonuses event.

The Comet SR is a racing-oriented variant of the Comet, evidently based on the Porsche 997 GT2 RS. The updated headlamp design is based on the optional LED-Matrix design of Porsche cars.

The Comet SR shares the body design layout from the standard Comet, but sports several CFRP elements throughout the body. The front of the car replaces the small extender with a carbon-fibre splitter, while the bumper features large mesh intakes, no longer having the small fog lamps on it. The upper area is similar in design and features as the standard Comet, but the circular lamps were replaced by rectangular modern lamps with LED strips. On the sides, the skirts and the vented fenders are finished in carbon-fibre, while the greenhouse area makes use of carbon-fibre mirror shells and roof panel. The rear section uses a carbon-fibre bumper that spans the width of the car and part of the rear quarters, while the boot assumes a similar design to that of the Grand Theft Auto IV rendition of the Comet (albeit the "Comet" badge was relocated to the centre). The vehicle also sports smaller, C-shaped tail lamps on the edges. The interior of the car shares the same dials and textures as the standard Comet, but features white stitching and a rear roll cage.

The vehicle is normally painted with a primary colour on the body and the roll cage, while the secondary colour seems to be only applied on secondary-coloured modification options. The wheels are similar to the "Synthetic Z" sport rims available in Los Santos Customs, although the centre of the rims are larger, almost reaching the surrounding bolts. The rims can also assign a "Wheel" colour, although only examples generated in the Content Creator may have a black colour.

The Comet SR is very fast in the Sports class, with excellent traction, good acceleration and a high top speed. It drives very similarly to the related Comet, but the extra aerodynamic modifications, improved engine power, and wider tyres make it grippier and easier to handle.

Like the standard model, the Comet SR is powered by the same single-cam carburetted V8, coupled to a 6-speed gearbox in a rear-engine, rear-wheel-drive layout. The engine sound is also different, being a lower-pitched variation of the one used in vehicles like the Jester and the ETR1. 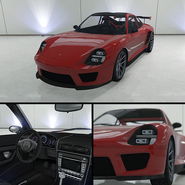 The Comet SR on Legendary Motorsport.

The Comet SR on the updated Rockstar Games Social Club. 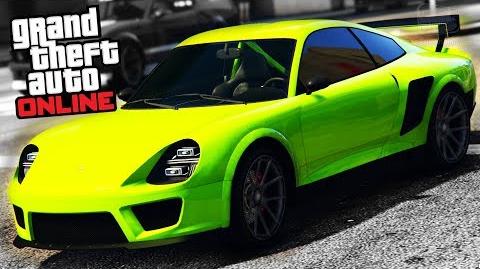