Standard White - 100%
“A car so light, fast and easy to drive, you barely have to lift a finger. Coincidentally, it's also the most popular car for the millionaire under 25. So you can pull up in Vinewood Hills, pull down the roof, watch the sunset, and make more trust fund babies in the passenger seat. That's asset growth.”

The Pfister Comet S2 Cabrio is a two-door spyder featured in Grand Theft Auto Online as part of The Contract update.

The vehicle is essentially a convertible variant of the Comet S2, sharing most of the details and features from the former, but uses a soft retractable roof instead of a solid one. When retracted/deployed, a rear cover opens and slides to the rear, and returns to its position when the roof is up/down completely. The interior of the vehicle shares the same dial set and textures as its hard-top counterpart, but adds the Pfister emblem on the horn cap.

The car's bodywork is painted in a primary colour, while the mirror shells are painted in a secondary colour. A trim colour is also available for the interior and overstitches. It uses the same wheel design as its hard-top counterpart, being identical to the "Hyperfresh" Street rims available in Los Santos Customs. These rims can also have a dedicated colour applied on them, although only naturally-generated examples may have one. 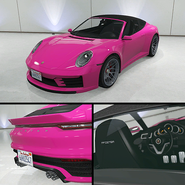 The Comet S2 Cabrio in the cinematic preview on Rockstar Games Social Club. 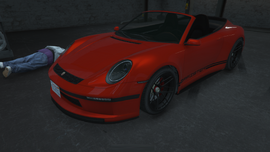