View source
watch 02:56
Raise a Floppa - The Loop
Do you like this video?
Play Sound
Not to be confused with the Comet SR.

Standard White - 100%
“This isn't just a fast car. It's a car with the kind of reputation that no amount of targeted advertising can buy. So, when some people see a Comet they make a wish. Others run screaming for cover, prophesying doom, destruction, and crippling medical expenses. Either way, you made an impression.”
— Legendary Motorsport description.

The Pfister Comet S2 is a sports car featured in Grand Theft Auto Online as part of the continuation of the Los Santos Tuners update.

The vehicle is a newer version of the Comet and retains a similar body shape to the Comet series, namely the SR model. The front of the car features a carbon-fibre insert on the bottom lip/splitter, while the area above has a black surrounding with a trapezium-shaped intake on the centre, two outer intakes with two horizontal elements on them and a central number plate in front of the central intake. The upper area has two circular headlamps and small indicators on the outer edges, while the boot lid features a slightly impressed area with a wide intake near the windscreen, which opens to reveal a small luggage compartment. The manufacturer emblem can be also seen on the front.

On the sides, the car has ridged details conforming the side skirts, along with concave shapes on the lower portions of the doors and painted door handles. The glasshouse area has black trim around the windows and black separations for the rear-quarter windows, as well as small mirror wings with black supports. Towards the rear, the car has a black vented engine compartment right after the rear window, which opens to reveal a carbon-fibre cover with meshed vents around and a silver central detail with "PFISTER" embossed over it. Right after the engine compartment, there is an active aero rear wing that is activated at moderate speeds, in a similar way to cars like the T20, the Nero and the XA-21, with a lip-spoiler on the end like other versions of the Comet.

The rear end of the car consists of a set of tail lamps with a red strip connecting them, as well as silver lettering below the central strip that displays the manufacturer name. The lower area of the car features a vented area with a black surrounding, horizontal elements, red units on the outer sides and a central number plate above, while the bottom features a carbon-fibre section with dual-exit, dual exhaust tubes.

The interior of the car is very unique, featuring a rounded cluster with five dials on it, with the speedometer on the centre, the tachometer and temperature gauge on the left, and a monitor and fuel gauge on the right. There are rectangular aircon units on the outer edges of the dashboard and above the radio display on the centre, as well as carbon-fibre strips and "PFISTER" lettering on the passenger side.

The car's bodywork is painted in a primary colour, while the brake calipers and the overstitches of the interior are painted in a secondary colour. A trim colour is also available for the interior, as well as a dial colour. It uses a set of rims identical to the "Hyperfresh" rims available in Los Santos Customs. These rims can also have a dedicated colour applied on them, although this is only possible on examples generated in Content Creator.

The Comet S2, like its predecessor, performs quite well, having great acceleration and great speed. Braking power is good, as it stops the whole vehicle rather quickly and decelerate the car pretty quickly too.

Traction is excellent, as it does not cause much wheelspin when being launched hard and the vehicle's cornering ability is also excellent, as it feels very planted to the ground and one can turn tight corners with extreme speed without worrying of losing control. All these characteristics make it one of the best vehicles in its class and could even compete with stock cars in the super class, as it is able to keep up to them through the corner entry and stability through corner exits.

However, despite having excellent traction, the Comet S2 suffers from what is called a "Pendulum Effect" from rear-engined, rear wheel drive vehicles. When taking an s-curve, one must be cautious so as to not swerve right instantly after swerving left or vice versa, as this will cause the car's traction to break due to the vehicle's weight shifting and upsetting the balance. Advice in tackling an s-curve with the Comet S2 is to go into the 1st corner with power then negotiate and enter the 2nd one with a slight touch of the brakes, or not pressing on the accelerator and once the car points straight, then continue pressing on the accelerator to power out of the final s-curve corner.

Similar to the Comet Retro Custom and the Comet Safari, the vehicle is powered by a flat-6 engine, evidenced by the six pipes seen on the underside of the car, coupled to a 7-speed gearbox in a rear engine, rear wheel drive layout. Its engine sound is similar to the one from the Comet SR. 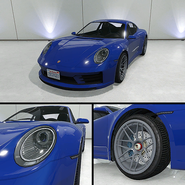 The Comet S2 on Legendary Motorsport.

The Comet S2 in the cinematic preview on Rockstar Games Social Club.