“You always wanted one of these when in high school - and now you can have the car that tells everyone yes, these are implants - on your head and in that dizzy tart next to you. Boom. You go, tiger.”

The Comet is a recurring sports car that appears in both 3D Universe and HD Universe. It is manufactured by Pfister in the HD Universe.

The Comet is based on the Porsche 911 and best resembles the 911SC Targa from the late '70's or the early 1980s; however, like newer 911 models, it has an all-wheel-drive configuration. 3D Universe renditions of the Comet are front-engined, unlike the real Porsche 911, which is famously rear-engined; this led to speculation that the Comet was inspired by a Datsun 240Z. The headlamps may also have been inspired by the 1966-1969 Alfa Romeo Spider. The rear bears a resemblance to the 1980-1984 Chevrolet Opala.

The Comet is distinguished by the angled front end, small bumpers with overriders and circular headlamps, along with their open tops. In the original releases of Grand Theft Auto: Vice City, the Comet assumes a fastback profile with connected tail lamps and curved rear window, while in Xbox and Mobile versions of GTA Vice City, Grand Theft Auto: San Andreas and Grand Theft Auto: Vice City Stories, the car assumes backwards-slanted standalone C-pillars with small rear window, separated tail lamps and a central license plate, bearing a heavy resemblance to the rear section of the Porsche 914.

The Comet in GTA Vice City only spawns in single body colours, while in later games, the rear pillars/section may receive a secondary colour.

Manufactured by Pfister, the Comet in Grand Theft Auto IV largely resembles a Porsche 996 Carrera 4S and the Porsche Carrera GT for the front grille/mouth and headlamps. Like the real 911, the GTA IV Comet is rear-engined, although it has a V8 engine rather than a flat-6 like most Porsches, which would be nearly impossible to fit into the rear of a Porsche 911.

The Comet remains mostly identical to its previous iterations, but assumes a newer, shorter design, where the front features a set of meshed intakes and small fog lamps, along with a small extender. The upper area features a set of circular headlamps and turn signals located on black housings, as well as a front-mounted, carpeted boot with space for luggage, similar to the Turismo. A Pfister logo is also seen on the front.

The sides of the car feature a rounded design with flat skirting area, while the doors have silver vertical handles. The greenhouse area features black trim around the windows, black inner pillars and body-coloured mirror shells. Right after the rear window, there is a set of thin vents intended for the engine.

The rear of the car features a small engine compartment with a ducktail spoiler and the corresponding badges on it, while the tail lamps can be seen on the outer edges. The bumper is relatively simple and has two mouldings for the exhaust tubes.

Inside the vehicle there are two sport seats in black leather, resembling Lamborghini's seat design. Pfister logos can be also seen on the headrests. The seats also feature yellow/orange stitching.

The Comet is only seen in a variety of single body colours. The rim design is unique, being five wide spokes with five black bolts around the centre and wrapped in low-profile tyres. It also features large, cross-drilled disc brakes all around.

The Comet in Grand Theft Auto: Chinatown Wars remains similar to the GTA IV iteration, albeit with simplier details and a grey detail between the tail lamps.

In Grand Theft Auto V and Grand Theft Auto Online, the Comet retains the same model as in GTA IV, but features an updated design, consisting of vented skirts, rear fender ducts and a standard rear deck spoiler with small scoops, giving it resemblance to the Porsche 996 GT2. It also features a rear license plate.

In the original versions of the game, the Comet's interior features a unique instrument cluster resembling the 2007-on Nissan GT-R, while in the enhanced versions, it shares the high-performance take on the EK-series Honda Civic cluster also shared with other Sports and Supercars.

Colour distribution is the same as before, but the interior stitching matches with the body colour. The rims are similar to the ones from GTA IV, albeit featuring grooves on the spokes. However, there is a set of sport wheels in Los Santos Customs named "Super Five" which closely resemble the ones from GTA IV.

With its AWD powertrain, grippy tires, and poweful engine, the Comet in GTA Vice City and GTA Vice City Stories is one of the fastest and best handling sports cars in the game. The Comet's handling limits and grip levels are extremely high. The car remains completely stable even when cornerning at full speed without any power oversteer or loss of traction. In fact, it is virtually impossible to drift with the Comet even in slippery conditions (such as on rainy roads or grass). The Comet's turn-in is very sharp, though there is a bit of understeer present. With its unflappable handling and near elite-level speed and acceleration, the Comet is an excellent car for Vice Street Racer challenges.

The Comet's top-down convertible nature allows the protagonist to jump over the driver's-side door, facilitating a more rapid takeoff.

The Grand Theft Auto IV rendition of the Comet is the fastest car in the game. The all-wheel drive layout ensures good standing-start acceleration, and high power ensures a top speed similar to that of exotic sports cars in the game. However, this car does subtly demonstrate a lack of torque; this is noticeable on hills when at low revs. This problem is minor, because Liberty City is mostly flat and street-constructed. Wheelspin and burnouts are very common with the Comet, because traction control is completely turned off.

High-speed cornering results in massive understeer in the Comet, but the car does have potential lift-off oversteer, or oversteer at lower speeds. The Comet also suffers from a weak suspension construction. The wheels are prone to buckle into the chassis after striking a curb laterally with less force than expected, making the Comet one of the more fragile sports cars.

The Comet is not necessarily superior in multiplayer racing; the Comet is lightweight and relatively unstable, leading to the car being rammed off-road by the other vehicles, or being launched into the air off of hills and losing control, depending on the player's driving skills. For this, the Comet has the stiffest suspension in the game, including the other sports cars.

This rendition is powered by a single cam carburetored V8, coupled to a 5-speed gearbox in a rear engine, all wheel drive layout (20%-80%, front to rear torque distribution). Due to its rear-engine nature, the Comet, like most rear-engined vehicles, can survive huge amounts of crashes without any sign of damage to its engine, although its crash deformation resistance is rather low, increasing chances of having its wheels misaligned or even stuck if not being driven properly. It shares the engine sound with the Infernus and the Super GT.

The conventional Comet in Chinatown Wars retains its sporty performance, but is ranked below higher end sports cars in the same, although its handling and braking are considerably good. The modified variant of the Comet is superior in speed, but is otherwise similar in performance to a standard Comet.

The Comet is fairly similar to the Comet in GTA IV. The mass, top speed and acceleration have been changed, however, and the most notable difference is that the GTA V version is rear-wheel drive, as opposed to a relatively uncommon all-wheel drive drivetrain in GTA IV. The car has fairly average performance for a sports car, but the traction is better than most of the sports cars. However, the car is very light and tail heavy, compared to similar cars such as the Feltzer and Elegy RH8.

Like the GTA IV rendition, the Comet is still powered by the same single cam carburetored V8 (with the website claiming that it is powered by a 3-liter engine capable of pushing 550hp), this time coupled to a 5-speed gearbox in a rear engine, rear wheel drive layout. Oddly, the website also claims it has a top speed of 203 mph, while the observed top speed was only 120 mph. It is, however, higher than what the handling top speed suggests, which is only 94 mph. The engine sound is shared with the Sentinel and the Tailgater.

The Comet can be modified at TransFender: 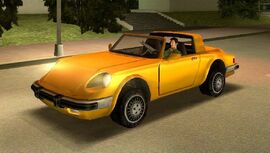 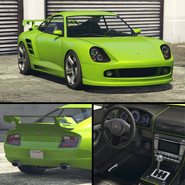 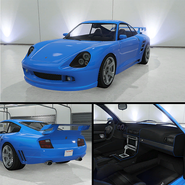 The Comet on Legendary Motorsport.

The Comet on the updated Rockstar Games Social Club.

The Comet in the cinematic preview on GTA V Rockstar Games Social Club. 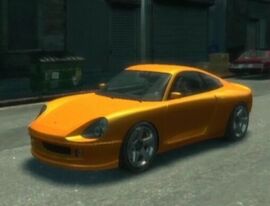 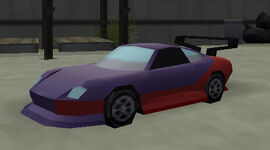 Unlike its predecessors, GTA IV's Comet is very rarely encountered on the streets.