"Squad up and be ready to hit the streets of Southern San Andreas with everything you've got. For the next seven days it's Combat Week in GTA Online, featuring big discounts on heavy artillery and military vehicles from Warstock. The fine people at Merryweather & Ammu-nation are also contributing to the carnage with sales on select goods & all services. Should you be a little light on cash or RP, there's Double GTA$ & RP available for playing In and Out (including 3 brand new maps just released today to try out) and Double RP on plenty more modes besides. Read on for full details."
―Rockstar Games Newswire 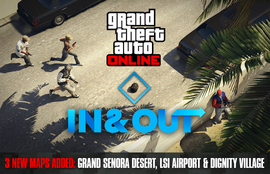 Retrieved from "https://gta.fandom.com/wiki/Combat_Week?oldid=1135362"
Community content is available under CC-BY-SA unless otherwise noted.