“There’s only one semi-automatic shotgun with a fire rate that sets the LSFD alarm bells ringing, and you’re looking at it.”
— Grand Theft Auto Online description on Ammu-Nation and Social Club.

“Extremely powerful shotgun. Could stop an elephant. And has. Used in Vice City on other things. With devastating results”
— Grand Theft Auto: Vice City Website.

The Combat Shotgun always features a stock, but only the Grand Theft Auto: Vice City Stories rendition has the stock extended. All renditions hold seven shells in the magazine tube.

In Grand Theft Auto IV, the Combat Shotgun takes the form of a Remington 1100 Tac 4 semi-automatic shotgun. The general appearance is reminiscent of the Pump Shotgun from the 3D Universe, but with a modernized design and semi-auto feature. The filename appears to be a misspelling of Beretta, though it suggests that it is more reminiscent of a Beretta shotgun, as some models also share the characteristic framing on the cannon.

In The Lost and Damned, the Combat Shotgun has been changed to have a pistol grip and tactical stock, similar to that of the Carbine Rifle (although the Combat Shotgun retains its earlier form in Terry Thorpe's gun van). This design is not carried on to The Ballad of Gay Tony, which instead features the original design.

The Combat Shotgun returns to Grand Theft Auto Online in The Cayo Perico Heist update, reassuming its 3D Universe appearance as a Franchi SPAS-12, with some influence from the Remington 870, seen on the trigger guard, forend, pistol grip, and rear of the receiver. Like the GTA Vice City Stories rendition, the stock is always extended.

“Extremely powerful shotgun. Could stop an elephant. And has. Used in Vice City on other things. With devastating results.”
— Grand Theft Auto: Vice City Website

The Combat Shotgun is fully automatic in the Grand Theft Auto: Vice City rendition, however this feature was removed in later installments, presumably to balance the weapon. The gas-powered repeater system allows the weapon to destroy a vehicle quickly, since it usually surpasses the capabilities of any non-automatic shotguns.

The Grand Theft Auto: San Andreas rendition has far less damage, but makes up with its improved accuracy and smaller grouping. This balances the weapon with the game's Pump Shotgun by making it less powerful, but more accurate and faster-firing. By the time the player gets to the point in which the Combat Shotgun is purchasable, they most likely have quite a lot of skill built up in the Pump Shotgun, making converting over to the Combat Shotgun feasible, yet not very desirable. In Grand Theft Auto: San Andreas, the SPAS-12 is the only weapon whose strafing speed does not increase when the weapon is leveled up from 'Poor' to 'Gangster'.

In Grand Theft Auto: Liberty City Stories and Grand Theft Auto: Vice City Stories, the Combat Shotgun is the most powerful of all non-automatic weapons, surpassing the regular Pump Shotgun and the Python. It is always one-shot kill in any distance and could destroy a vehicle in 3 to 4 shots. This powerful trait, combined with the auto-target aiming mechanics featured in both games, makes it highly suitable for fighting against large groups of enemies with strong weapons.

The Combat Shotgun is significantly better than the Pump Shotgun, having a quicker fire mode, a few more rounds and less time to take between shots. However, it is not always lethal, as it requires 2-3 shots at close quarters (unless aiming on the target's head). Its range is somewhat better compared to most shotguns, but still lacks power to sort enemies with mid/long-range weapons.

The Combat Shotgun holds 10 shells in the magazine, and 70 in reserve.

The Combat Shotgun operates and performs slightly differently compared to other shotguns in its class. It features a higher rate of fire than the Pump Shotgun but shares a similar damage profile, giving it an incredible amount of stopping power behind each shot. This gives it comparable performance, if not better, than the Assault Shotgun due to the more consistent damage output at range. This devastating performance, however, is stunted by the Combat Shotgun's strict semi-automatic function, meaning the trigger must be pulled for each shot, allowing automatic shotguns like the Assault Shotgun, Heavy Shotgun, and Sweeper Shotgun to maintain a competitive edge. The 6-shell capacity serves as another disadvantage, as it cannot be upgraded; all shotguns but the Musket and Double Barrel Shotgun outclass the Combat Shotgun in terms of ammo capacity.

Unlike other shotguns, it features a unique reload animation where the Combat Shotgun is flipped over and shells are loaded from above; each shell is also loaded individually, whereas other shotguns are reloaded in a single action, although the process is still spritely quick. It is also possible to cancel the reload process by pressing the firing button right after loading a shell, or continue reloading the remaining shells with the corresponding button.

When blind-firing from cover, it shows a semi-automatic behaviour, firing all six shells without requiring to press the button multiple times, though having a slower but consistent fire rate. However, it can still able to fire faster by pressing the firing button as one would do when standing still.

Grand Theft Auto IV and The Ballad of Gay Tony. 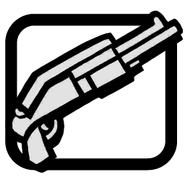 Grand Theft Auto IV and The Ballad of Gay Tony. 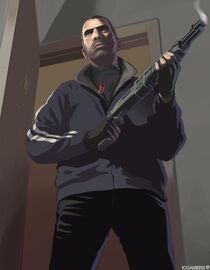 Beta artwork of Niko Bellic with a Combat Shotgun. 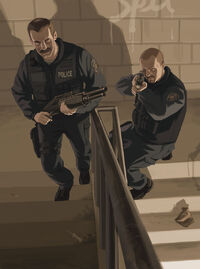 Artwork of an LCPD Officer (left) armed with a combat shotgun. 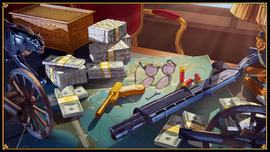 The artwork featuring the Perico Pistol and the Combat Shotgun on Juan Strickler's desk in his compound.