GTA Wiki
Register
Don't have an account?
Sign In
Advertisement
in: Weapons, Weapons in GTA Vice City Stories, Weapons in The Ballad of Gay Tony,
and 8 more
English

In Grand Theft Auto: Vice City Stories, the M249, as the name suggests, is based on the M249, specifically the M249E1 model. This rendition of the weapon is considered a Heavy Weapon.

“Firing at 900 rounds per minute, the Advanced MG takes targets down fast.”
— The Ballad of Gay Tony website description.

The M249 in The Ballad of Gay Tony (referred to as the Advanced MG) is the first light machine gun to be featured in the HD Universe. It is now based on the M249E2, as suggested by the barrel handguard and the fixed stock.

The weapon is placed in the Assault Rifle slot and thus, the character will be able to wield it while riding a helicopter or boat (both as a passenger). Although hard to see, it is possible to see a "M249" reading etched on the side of the weapon.

The weapon returns in Grand Theft Auto V and Grand Theft Auto Online as the Combat MG. It is now based on the Mark 48 machine gun, a larger-caliber derivative of the M249; this is also suggested by the side of the weapon reading "7.62mm". The model has the STANAG magazine adaptor of an M249, and the stock of an M60.

Unlike previous iterations of the weapon, the Combat MG lacks a folding bipod, and instead features Picatinny Rails for a wide variety of attachments. The weapon is now considered a Machine Gun and thus, it is able to be used by passengers of certain vehicles with enough room (i.e. helicopter bays, truck beds, while hanging on a side of a vehicle, etc.). The Combat MG also suffers in stealth due to the fact that it has a slightly lower fire rate when discharged from the hip, and lacks a suppressor attachment.

The weapon is a powerful, one shot kill gun that holds 100 rounds per magazine, and is capable of knocking down a person when hit (similar to the way shotguns do), but is slightly less effective than the Minigun. Victims shot with this weapon will release a higher amount of splattering blood than they do if shot by other machine guns. Since it is a heavy weapon, it can destroy unarmored vehicles quickly.

The Advanced MG employs a 200-round magazine capacity and high rate of fire, but has less stopping power and accuracy than the Assault Rifle and the Carbine Rifle. It is highly inaccurate because the weapon is fired from the hip rather than from the shoulder, causing high recoil when firing. The Advanced MG requires sustained fire to destroy a vehicle, unlike the LMGs from previous games, which could destroy vehicles with just a few rounds.

The weapon is best suited for engaging multiple enemies at close to medium range, but suffers in long range combat, being outclassed by the other rifles and even SMGs. While still able to aim targets at long distances, the gun will often miss it unless if fired in short bursts. It is recommended to aim at the opponents' heads for higher chances of eliminating them. Crouching will also help at reducing the recoil, decreasing the chances of missing the target.

The Combat MG is all-round superior to SMGs, the Assault Rifle, and the MG. It shoots further, but with less accuracy than the Carbine Rifle. Its recoil is also notably lighter than the MG and even its TBoGT counterpart, due to the reduced rate of fire. However, it is somewhat slow at reloading and the wielder usually has low mobility. It can shoot down almost any aircraft thanks to its 100-round (200 with extended clip) magazine.

With the appropriate attachments, the Combat MG can increase the accuracy and reduce the recoil a bit more, increasing its general efficiency over most bullet-based weapons.

F Free for players that have the Special/Collector's edition of the game.
* These Tints can also be unlocked by bringing the Combat MG to any Weapon Workshop. 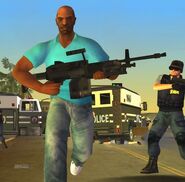 Luis with an Advanced MG in The Ballad of Gay Tony. 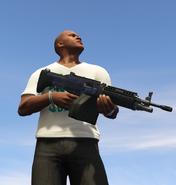 Franklin with his Combat MG.