The building is unnamed in-game, but is situated on the corner of Jade Street and Columbus Avenue in the Star Junction region, located west of the Zirconium Building and east of the Bawsaq Building. It appears as a 33-story black cuboid-shaped skyscraper presented with a decorated plaza featuring water fountains and steps. Its proximity with Columbus Avenue's construction site results in a large amount of traffic often occurring on the intersection it is situated at.

It is completely unmentioned in the storyline and is not accessible to the player.

The building is heavily based on the One State Street Plaza building located in the Financial District of Manhattan, however its location is more akin to that of the Olympic Tower located in the Midtown district on 5th Avenue in Manhattan, New York City. Its file name, 5thblksky01_dc9, would suggest it is based on the latter.[1], however some of its window textures are named after 15 State Street.[2] 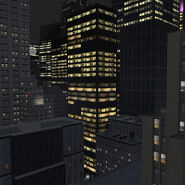 The building as seen at night from the north east.

Alleyway between the building and Bawsaq Building.

Looking up at the building.

The building in Grand Theft Auto: Chinatown Wars.
Add a photo to this gallery

Retrieved from "https://gta.fandom.com/wiki/Columbus_Avenue-Jade_Street_Building?oldid=1122956"
Community content is available under CC-BY-SA unless otherwise noted.