Unknown
“Get off my ridge, you Vietcong bastards!”

According to his own quotes, Fuhrberger is a former colonel who served during the Vietnam War, and now resides at a house in East Beach, Los Santos. He still possesses military memorabilia and surplus weapons and ammunition, a fact discovered by LB, a member of the Grove Street Families.

Ryder, looking for a way to provide the gang with military-grade weapons instead of Emmet's stock to assist the Families against the Ballas gang, was informed by LB of Fuhrberger's stock. Carl Johnson, a member of the Grove Street Families, entered his home with Ryder's assistance, and stole a few crates containing weaponry, before escaping in a black Boxville before sunrise. The colonel is never seen nor mentioned again after the mission.

During the mission, Fuhrberger can be seen sleeping in his bedroom. If the player makes too much noise once, he will be yelling Get off my ridge, you Vietcong bastards!, which could indicate that he suffers from mental trouble following the end of the Vietnam War. It also suggests that he was permanently traumatized by war. If the player makes too much noise once again, Fuhrberger will notice CJ. If the player has collected less than three crates, Carl will escape the house, but Ryder will escape with the Boxville without CJ, and the mission will fail. If the player attempts to kill him, this will not work, as doing so will automatically trigger the cutscene where Fuhrberger wakes up, and the mission fails. Fuhrberger can be killed only after collecting three crates, but doing so won't affect the storyline. After killing him the player can collect his shotgun.

His house can be accessed at any time, before or after the mission. 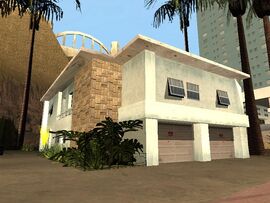