GTA Wiki
Register
Don't have an account?
Sign In
Advertisement
in: Gangs, Gangs in GTA III, Gangs in GTA Advance,
and 3 more
English

The exact origins of the Colombian Cartel in Liberty City aren't precisely explained, but their heavy presence in the region can possibly be explained by real-life events occurring in Colombia during the time period. The Colombian Drug War came to a head with the assassination of Pablo Escobar in 1993. By the late 1990s to early 2000s, the cartel system in Colombia was in a state of collapse. Colombian crime organizations began operating outside of Colombia, setting up operations in other Latin American countries, the United States, Canada, and Europe. It can be assumed that the Colombian Cartel in-game began moving operations to Liberty City sometime between 1993 and 1997 due to internal pressure in their home country, as they are well established in city by 1998.

The Colombian Cartel is exceptionally well armed, and are led by Catalina and Miguel to produce and supply the drug SPANK in Liberty City. It is suggested by Liberty City police records that the Colombian Cartel may be using the local airport and a harbor freight as a front to smuggle the SPANK drug into Liberty City, although they have yet to thoroughly prove this. In Grand Theft Auto: Liberty City Stories, Rise FM DJ Boy Sanchez mentions having tried a new drug on the street called "SPANK". This means that SPANK was at least in production in 1998. Miguel was leading this cartel during this period as well; it is unknown when Catalina joined the cartel but she is seen with Claude and Cartel members robbing a bank in the beginning of GTA III. Catalina betrays her boyfriend Claude and took off with the money the pair had just robbed from a bank. After Claude's feud with the Triads ceases, he faces the Colombian Cartel as a new and worse enemy for the rest of the game.

Miguel is later linked to the assassination of Yakuza leader Kenji Kasen, although he actually had nothing to do with it (real estate mogul Donald Love ordered Claude to make it look like the Cartel's doing to start a gang war and drive real estate prices down). He is later chained up in the incomplete skyscraper in Fort Staunton by Kenji's sister Asuka and tortured non-stop until he is killed by Catalina, when she kidnaps Maria and kills Asuka. Catalina assumes command of the Cartel herself. After trying to escape in a helicopter, her helicopter is shot down by Claude as revenge for betraying him, and trying to kill him.

It is clear that the Cartel is linked to the Panlantic Construction Company, a company serving as both a legitimate construction company and a front for illegal operations. In GTA Liberty City Stories, Cartel members were hired by Panlantic as bodyguards for Avery Carrington, who was working for Panlantic and arrived in Liberty City to acquire real estate for development. After Avery was killed by Toni Cipriani, Donald Love took over negotiations with Panlantic to seal the deal on developing Fort Staunton, which would be later bombed by Cipriani. In GTA III, the construction site in Fort Staunton serves as the Cartel's turf in Staunton Island until it is seized by the Yakuza, erupting into an endless gang war.

With Catalina's death it is certain the gang lost a lot of influence in the city as it would be taken over by a less competent member. Ironically, after The Exchange they get better guns (Uzi and AK-47).

In this game, set a year before the events of GTA III, the Cartel have been moving their merchandise on smuggling routes controlled by the Uptown Yardies, led by King Courtney, causing bad blood between both gangs.

King Courtney sends hired gun Mike to steal the Cartel's latest delivery of SPANK, and later to take out one of the Cartel's lieutenants during a sit-down. Afterwards, Courtney, looking to settle the turf war he's been having with the Cartel, lies to Mike that Cisco, the leader of the Cartel, was responsible for the deaths of his friends Vinnie and Jonnie, and that he has been spotted at a restaurant in Belleville Park.

Mike, having little choice, confronts Cisco and, after roughing him up, decides that he is not the killer. He later works for Cisco, who has him deliver his latest shipment of drugs to three shoe shops he owns, destroy a factory manufacturing aerial surveillance equipment for South American governments, and kidnap the niece of Yakuza leader Asuka Kasen, owing to her refusal to allow his gang to move their merchandise through Yakuza territory.

After Asuka's niece is returned, Cisco flees to his private jet at Francis International Airport to avoid retaliation from the Yakuza, and looks into Vinnie's mystery killer for Mike, ultimately informing him of a death trap designed for him in Wichita Gardens.

Cisco, offering Mike his full support and resources in his investigation into Vinnie's death, arranges for him to drive an identical limousine to his, so that he can lure his enemies away as he drives to an anti-drug conference that he is attending.

In exchange, Cisco offers Mike information on the whereabouts of the bomber he is looking for. However, as Mike heads to confront the bomber, Vinnie catches Cisco by surprise at his jet and takes him out.

The Cartel mistakenly believe that Mike took out their leader, causing them to ambush both him and 8-Ball at an Italian restaurant in Pike Creek.

Following this, Mike attacks Cisco's successor as leader of the Cartel, either killing or sparing him (which determines whether or not they remain hostile towards Mike).

Soon after, the Cartel manage to gain control over Cedar Grove back from the Uptown Yardies, who lose a lot of influence over the city. It is unknown how the two gangs solved their differences, as they are allies by 2001, however it is possible that the change of leadership in the Cartel's ranks may be a factor, plus the weakened Yardies might have been forced to work for the now bigger Colombian organisation.

Catalina, the leader of the Colombian Cartel circa 2001. Miguel, the former leader of the Colombian Cartel. 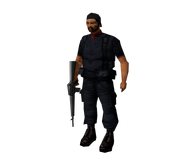 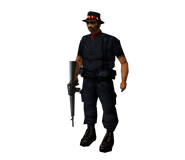 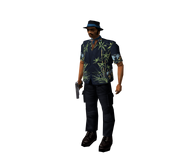 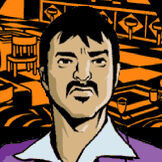 Alternative Cartel figures in Grand Theft Auto III. The first two appear in the intro, the third one only appears in the game files, and the last one appears in "The Exchange".

A shootout between a Yardie and a Colombian, despite their gangs being allied.