The Cognoscenti Cabrio is a two-door convertible version of the Cognoscenti, appearing to resemble the real-life Bentley Continental GT.

The Cognoscenti Cabrio seems to have the same front area as the Cognoscenti, but has more sloping lines that lead down the side to the rear end. The front bumper features horizontal chrome strips on the front quarters, as well as three air intake vents and a license plate on the centre, the outer ones being smaller and the central one. The front meshed grille and headlamps were borrowed from the normal Cognoscenti, but lacks the chrome grille surrounding. The bonnet assumes a similar shape to the one on the four-door equivalent.

The sides of the car feature a more straight line design until it reaches the rear fender and quarter panel. The car has side skirts that fall low to the ground. The side windows feature chrome trim along the edges and the B pillars are finished with a black polymer surface. The car features a rear-side window that follows the sloping design line and falls to the rear fascia.

The rear of the car is a hatchback like design with the same general look as the normal Cognoscenti. However, the boot features a small lip and the rear has a black portion holding the rectangle-shaped exhaust tubes. The area of the license plate is painted instead of finished in black, and the tail lamps have sharp edges on the upper sides.

The car features a two-piece folding hardtop that stores in the trunk area under the trunk lid. The top takes very little time to be raised or retracted. The vehicle can only be painted with a primary colour for the bodywork and the interior stitching. It features a set of large wheels with wide track medium-profile tyres, with the rims appearing to be similar to the "Fagorme" SUV rims available in Los Santos Customs, but without any special detail on the inner spokes.

Visibly it is clear that the car's suspension is focused more on comfort; it has a fairly loose anti-roll bar setup within its suspension system, and as a result, it tends to have slightly more body roll. The exhaust note sounds notably sportier than the more hushed saloon version and as a result suggests better acceleration (possibly also due to more than likely lighter weight). The top speed is very good, as well as acceleration, thanks to, according to the description, a powerful 5.8L V8 engine. Handling is top-notch due to a not-so-lengthy wheelbase, along with a low center of gravity and good weight distribution, although the car's turning radius isn't the sharpest. Rollovers are not a factor when it comes to cornering.

The vehicle shares its engine sound with the Comet, but with a cleaner tone.

A blue Cognoscenti Cabrio in the first trailer.

Billboard advert of the car. 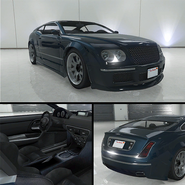 The Cognoscenti Cabrio on Legendary Motorsport.

The Cognoscenti Cabrio on the updated Rockstar Games Social Club.

Poppy Mitchell's unique Cognoscenti Cabrio features a bright pink paintjob and a unique personal licence plate. It also has several modifications applied. It is seen during one mission in GTA V [1] and during a Nightclub management mission in Grand Theft Auto Online. 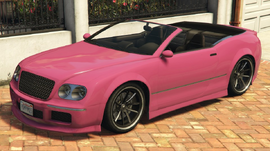 Molly Schultz owns a red Cognoscenti Cabrio as seen during Legal Trouble. The car is chased around LSIA before she crashes it into a hangar wall, running inside to her imminent death. The car can be stolen just before, and will otherwise despawn afterwards. [2] 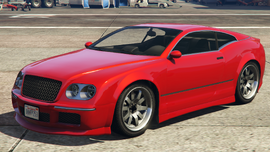 Retrieved from "https://gta.fandom.com/wiki/Cognoscenti_Cabrio?oldid=1262306"
Community content is available under CC-BY-SA unless otherwise noted.