"The original Cog Cabrio was a landmark in bringing luxury grand tourers to a wider market, which explains why every five-figure broker with a pinstripe suit and a history of sexual assault has one. Invest in this new four-door model, with more headroom and a plush interior, and you should stand out of the crowd for at least another couple of months. Armored edition available."
―Legendary Motorsport description.

The Enus Cognoscenti 55 is a luxury full-size sedan appearing in Grand Theft Auto Online as part of the the Executives and Other Criminals update.

The Cognoscenti 55 is a full-size four door luxury sedan. The front fascia is based on the 2005-2013 Bentley Continental Flying Spur. The overall design, side body and the name "55" is inspired by the Maybach 57 SWB and Maybach S600. The rear is identical to the Cognoscenti, albeit the C-pillar is slightly taller and to a higher-degree upright.

In the side profiling, the vehicle features an elegant A-pillar, painted in the primary color of the vehicle. Carbon-black mirrors are fitted onto the black mirror attachment in between the horizontally running belt line and the A pillar running diagonally. Along the belt line finds the C pillar, which is found to be finished in a carbon-like black, rather than the standard primary color. It follows the result of the door and window trims running around the inserts of the windows. Along the bottom third of the door is a black trim line running parallel to the wheelbase and belt line, ending closely to the front of the rear arch, and rear of the front arch, respectively. Along the bottom wheelbase is a small skirt coated in the primary color, which bevels out by a fraction of an inch from the rest of the vehicle. Two standard chrome handles are fitted onto the doors, only centimeters away from the respective door channels.

On the rear is a small duct-tail spoiler accompanying the boot. Around the face of the boot which hinges directly after the rear window is a chrome panel holding twin reverse lights at the very eastern and western ends of the panel, finished with chrome wrapping around the edges. A short gap - approximately the width of the reverse lights themselves - is found in between the lights and the rear license plate. The top chrome lining features the word "ENUS" embossed into the chrome. Directly above this is the logo of the aforementioned company. The black trim line found running along the wheelbase of the vehicle is featured again on the rear, this time curving around the curved rear bumper, before ending at the rear of each rear arch. center bore surrounded by 5 bolts, with a relatively small pitch circle diameter. Seen behind the rims are silver brake disks with several lines grooved into the rotor and caliper.

The Cognoscenti 55 has slightly better performance than the standard Cognoscenti. It has an acceptable rate of acceleration, which is further improved on its Armored variant. The turning radius is impressive, and is an improvement from the original Cognoscenti, partially due to the shortened wheel base. The braking is also stunning for a vehicle of its size and weight; the vehicle also bears good traction, allowing it to gain control around corners at high speed without too much loss of control.

The engine cover seems to be a single-cam V8, supported by the engine sound, which sounds to be relatively low-revving, with heavily-muffled exhaust tips. The engine is coupled to a 5-speed gearbox which is low-geared and is further connected to a rear-wheel-drive drivetrain.

A pre-release screenshot of the Cognoscenti 55 in Grand Theft Auto Online. 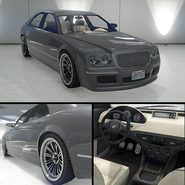 The Cognoscenti 55 on Legendary Motorsport.

The Cognoscenti 55 on the updated Rockstar Games Social Club.

The Cognoscenti 55 in the cinematic preview on GTA Online Rockstar Games Social Club.

Retrieved from "https://gta.fandom.com/wiki/Cognoscenti_55?oldid=1243995"
Community content is available under CC-BY-SA unless otherwise noted.