The Enus Cognoscenti (Armored) is an armored luxury four-door sedan featured in Grand Theft Auto Online as part of the Executives and Other Criminals update.

The car holds the original design of the Cognoscenti, having a long, almost LWB body with a main body design based on that of the Bentley Continental Flying Spur, and its smooth body type and length resembling a Maybach Type 57-62 in nature, as well as its general appearance. It can also be considered to be based on the Bentley Mulsanne due to its length and wheel design.

As for its armored characteristics, just like the armored Ballers, it features armor padding in the door panels, and black, high impact, steel wheels. In the greenhouse area, armored plating surrounding the windows and their trims are found, designed to deflect bullets, along with the shatter resistant, bullet-resistant windscreens which take a large amount of fire-power to have any effect on the players inside.

The Armored version of the Cognoscenti in GTA Online sacrifices some acceleration for top speed. The added weight gives the car undesirable handling. It is more durable than the Armored Kuruma, being able to survive an explosion, sticky bomb or rocket launcher shell, whereas the Kuruma will be destroyed from a similar blast.

The Cognoscenti (Armored) can take the following: 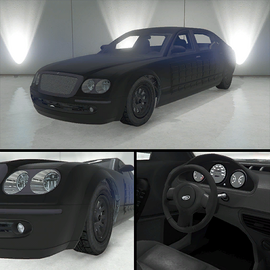 The Cognoscenti (Armored) on Legendary Motorsport.

The Cognoscenti (Armored) on the Rockstar Games Social Club.

Retrieved from "https://gta.fandom.com/wiki/Cognoscenti_(Armored)?oldid=1175103"
Community content is available under CC-BY-SA unless otherwise noted.