Standard White - 100%
“The original Cog Cabrio was a landmark in bringing luxury grand tourers to a wider market, which explains why every five-figure broker with a pinstripe suit and a history of sexual assault has one. Invest in this new four-door model, with more headroom and a plush interior, and you should stand out of the crowd for at least another couple of months. This model has an extended wheelbase. Armored edition available.”
— Legendary Motorsport description.

The Enus Cognoscenti (Pronounced as kog-no-shen-tee) is a luxury full-size sedan appearing in all HD Universe games, except for Grand Theft Auto V. In Grand Theft Auto Online, it reappears as part of the Executives and Other Criminals update.

The Cognoscenti in Grand Theft Auto IV is mostly based on the Maybach 62, with front influence from the Bentley Continental Flying Spur. The rear fascia, especially the rear lights, trunk line, and registration plate, take some inspiration from the Rover 75.

The Cognoscenti is rather unique, as it features a wheelbase long enough to qualify for a limousine classification, but is still shorter in length to the Stretch. The front bumper features chrome strips on the outer edges, along with a black vent on the centre with a separation placed between two small unusable circular lamps. The upper area is predominated by the chrome mesh grille featuring the manufacturer emblem embossed on the upper side, and the chrome headlamp housings with large circular lamps and hard-to-see front white turning lights located above the external headlights. The bonnet is relatively simple and features a vented section in front of the windscreen.

The sides feature flared wheel arches and a slightly wider skirting area, along with chrome strips passing through the doors. The greenhouse area is relatively long, featuring black trim and rear-view mirror shells. The windows on the area behind the front seats are always tinted, denoting its luxury appearance. Interestingly, the car has the same interior as the Schafter, complete with a Benefactor logo on the steering wheel.

The rear of the car is somewhat rounded and features vertical tail lamps on the edges. The boot has a license plate between the two reverse lamps, all of them located inside a chrome surrounding with the manufacturer name embossed on the upper part and an emblem just above it. The rear bumper features a single chrome strip and a lower vented area, housing the exhaust tubes on the edges.

The car may appear with monotone or two-tone colours, with the secondary one being applied on the bonnet, roof, pillars and boot. It uses a unique set of plain central rims with 12 small spokes around it, wrapped in medium-profile tyres.

For Grand Theft Auto: Chinatown Wars, the design of the car has been reduced in size to that of a standard four-door sedan. The DS rendition features distinct single tone darker paintjobs in a variety of colors compared to other cars in the game. The PS rendition retains many of its GTA IV design cues, such as the two-tone body color and fascia design.

The car makes a return in Grand Theft Auto Online, with the same design and features from the GTA IV iteration, but with improved light textures and standard rear windows.

Colour distribution is the same as before, where the primary colour is applied to the body and the interior stitching, while the secondary colour is applied on the bonnet, roof, pillars and boot. A trim colour is also available for the interior, being applied to the dashboard, seats and door panels. Its wheels feature a unique rim design, consisting of nine split spokes with a plain centre, wrapped in low-profile tyres.

The Cognoscenti is one of the larger cars in the game, with an exceptionally long body for a sedan. The weight and length of the car make it more of a vanity vehicle than one useful for missions; its handling is inferior to other sedans found throughout the city. However, it boasts a powerful engine and a rear-wheel-drive configuration, so slides and over-steer can be achieved. The suspension has a good balance of soft/firm, which irons out bumps in the road, meaning that the car does not over-compensate over the bumps, whilst not jarring over them either. The car is slightly clunky in the corners, but given time, has superior straight line speed. This car is a good option for loading up several people and making a fast getaway car, but in the corners one can easily crash and get caught. Lastly, the car's mass makes it useful as well against both police cars and roadblocks.

The vehicle is powered by what looks like a V8 engine and shares the smooth engine sound from cars like the Stretch, the Admiral and the PMP 600.

Again, the vehicle is powered by what looks like a V8 engine and the engine sound is the same as the Tornado and the Bullet. 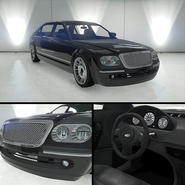 The Cognoscenti on the updated Rockstar Games Social Club.

The Cognoscenti in the cinematic preview on GTA Online Rockstar Games Social Club.

Another IAD Cognoscenti in a grey-white colour.