"A global chain of fast food restaurants specializing in deep-fried, chicken-flavored slabs of salt and fat."
― Description at LCN.com.

Cluck Norris from the front.

Cluck Norris from the side.
Add a photo to this gallery

Cluckin' Bell is also featured in Grand Theft Auto V but their restaurants are no longer accessible. Cluckin' Bell has a factory, farm and warehouses in Paleto Bay named "Clucking Bell Farms". Their trucks can be seen coming and going frequently. The player accesses this warehouse during the mission The Paleto Score. Its main stock competitor is Taco Bomb, while its other competitors stand as Burger Shot, Pizza This... and Up-n-Atom Burger.

Clucking Bell Farms
Add a photo to this gallery

Market (unmarked on the map in early PS2 version)

Willowfield
Add a photo to this gallery

Pilgrim
Add a photo to this gallery

Ocean Flats
Add a photo to this gallery

Tierra Robada
Add a photo to this gallery 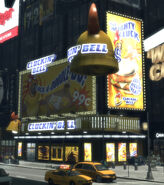 Pleasure Pier, Del Perro.
Add a photo to this gallery

Promotional poster for the triathlon.
Add a photo to this gallery

Cluckin' Bell poster.
Add a photo to this gallery

Cluckin' Bell poster.
Add a photo to this gallery

Cluckin' Bell banner.
Add a photo to this gallery
Vehicles 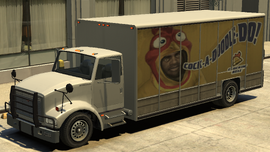 Billboard found near Rockford Plaza.
Add a photo to this gallery
Vehicles 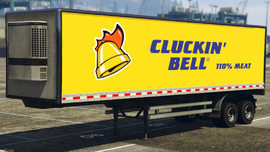 Cluckin Bell mask added with the Arena War update for GTA Online.
Add a photo to this gallery

Retrieved from "https://gta.fandom.com/wiki/Cluckin%27_Bell?oldid=1261538"
Community content is available under CC-BY-SA unless otherwise noted.