Luis throwing out a drunk in Club Management

"As one of Tony Prince's club managers, Luis can work nights at the clubs, which includes dealing with issues like club security and unruly club patrons, as well as tending to the many needs of the Liberty City party-going elite."
— TBoGT Official Website

Club Management is a side-mission featured in The Ballad of Gay Tony.

The mission takes place in Maisonette 9, after Luis Lopez changes into his suit and earpiece in the security room with Joni. This side-mission is not available immediately - the player must receive a call from Tony Prince asking Luis to go and help out at the club more. The club is open from 9:00 PM until 6:00 AM.

The objective of Club Management is to supervise the main areas of the club and deal with troublemakers when trouble arises. At the end sequence of every club management, Dessie will contact Luis and ask him to run an errand for the VIPs in the club.

After assisting celebrities on eight different occasions, Luis will receive a call from Tony thanking him for doing such a good job taking care of the club's celebrity clientele, promising him that he will get someone else to handle VIP requests from then on, much to Luis' relief. After this the player will no longer have to run errands for celebrities during Club Management, and can choose to simply keep watch over the club and deal with troublemakers, drunks and dealers until the club closes.

From time to time during Club Management, Joni will call to Luis' earpiece with an excuse for him to come urgently into the security room. Usually to his surprise, a variety of sexual acts will follow, including having her dress rolled up and giving him a blowjob, casual sex with Luis while leaning her over the desk, and a sort of a short lap-dance. Having sex with Joni will refill Luis' health, but is generally pointless as there's a first aid pack in the security room. If Luis has sex with a girl in the bathroom after dancing, Joni will call Luis in and scream at him for breaking her heart. At other times she will call and question Luis about the nature of their relationship, ending with her telling him to forget about it and thinking of starting taking meds.

Luis cannot take shots or participate in the champagne drinking game during Club Management due to the fact he is working.

A black Schafter is provided for the missions, presumably as an official business car. 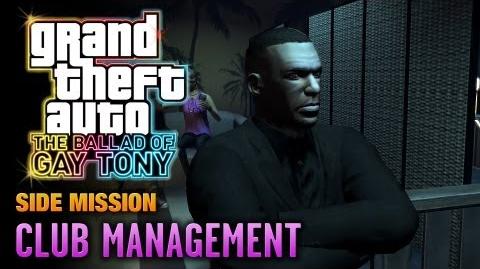 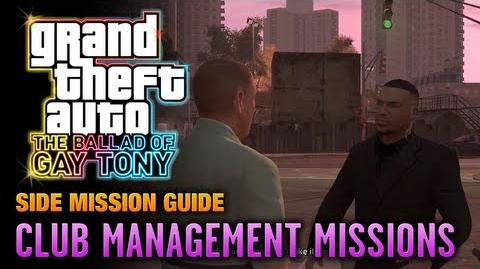 Retrieved from "https://gta.fandom.com/wiki/Club_Management?oldid=1260619"
Community content is available under CC-BY-SA unless otherwise noted.