View source
watch 02:56
Raise a Floppa - The Loop
Do you like this video?
Play Sound
This article is about the vehicle. For the melee weapon, see Golf Club.
For other uses, see Club Management or Nightclubs.

Standard White - 100%
“The BF Club is back on the market, so pull on your platforms, slam the pedal, and let the psychedelic mix of flashy liveries, insane speed and economic handship mash your mind back to the 70s. It's the closest you'll get to time travel.”
— Southern San Andreas Super Autos description.

The Club is a two-door hatchback featured in Grand Theft Auto: San Andreas and Grand Theft Auto Online as part of the Los Santos Summer Special update. It is manufactured by BF in the HD Universe.

The Club is a two-door hatchback that resembles Volkswagen Polo MK 2 with the front of Volkswagen Golf MK 2. In comparison to similar hatchbacks, the Club is actually one of the largest of its class, comparable in size to the Mesa.

The Club is available in a variety of single colors.

The Club returns to Grand Theft Auto Online in the Los Santos Summer Special update. Being manufactured by BF, it assumes an older design of the Volkswagen Golf MK 1. The front of the car is heavily inspired by the first generation Ford Fiesta XR2, while the taillights seem to bear resemblance to the Volkswagen Polo Mk1. Los Santos Customs features a variety of exterior modifications inspired by earlier variations of the Golf, and more modern front and rear bumpers reminiscent of the 1984-2009 South African CitiGolf.

The Club's front end is plain and uncomplicated, consisting of a black bumper housing the turning lights on the outer edges, the black grille with the manufacturer's badge on the centre, and the circular headlamps located in black housings on either side. A small splitter can be seen below the bumper. The side denote the ridges passing through the doors and going towards the rear, as well as the flared arches. The cabin area is mostly dominated by plastic trim around the windows. The doors feature black square-shaped mirrors and chrome handles. The rear of the car is very simplistic, featuring an angled rear hatch and thebset of rectangular tail lamps. An exhaust tube can be seen protruding from the lower side. Its interior reuses the same dials as the Futo and Blista Compact.

The vehicle is mostly painted in a primary colour, while the arches are painted in a secondary colour. It uses a set of eight-spoke standard rims with large centres.

Due to its design, the car's performance is mixed. While possessing good top speed and acceleration as well as stable cornering as a result of its front wheel drive (at the expense of torque), the suspension of the Club is stiff, making the vehicle unsuitable for high speed offroading as its higher center of gravity as a result of its large but light construction makes the car unstable and susceptible to rollovers. Its relatively high ground clearance, however, makes the Club more suitable for off-road driving than similar vehicles such as the Flash.

The Club is considered one of the best compacts in the game. It has good acceleration and is capable of reaching some of the highest top speeds in its class. The Club, unlike earlier released compact cars, such as the Asbo and Blista Kanjo, does not suffer from strange handling phenomenon that makes these cars relatively difficult to drive. The Club offers good grip across all weather conditions, remaining stable during both low and high speed cornering, though the brakes do leave a bit to be desired. Impressively for a FWD car, the Club does not suffer very much from understeer during accelerated cornering either. Crucially, unlike all previously released compact cars, only under extreme circumstances does the Club exhibit the strange snap oversteer that normally befalls cars in this class, leading most players to consider the Club the best handling car in the compacts class. 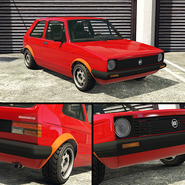 The Club in the cinematic preview on Rockstar Games Social Club.