The Clown Van is essentially a Speedo with a colorful "Fiddler the Clown" livery and unique cosmetic features, such as a red nose attached to the grille and horns attached to the roof. Most of the features from the regular Speedo were painted, with the exception of the grille, window trims and rear right section holding the handle and the license plate. Unlike the regular Speedo, the Clown Van has a clean interior. The radio display is also static, as it reads "SPEEDO" rather than the radio station currently playing. The vehicle uses a Clown horn by default, which is the same one available in Los Santos Customs and other mod shops.

The vehicle is set to spawn in a white color, but because of the livery texture, it is only seen on the inner trimmings of the doors and the engine bay. It uses a set of wheels similar to the Police Transporter, but has a white detail around the tires. 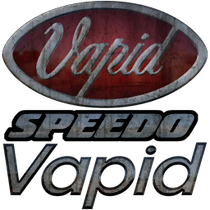 The Clown Van performs identical to the regular Speedo, having a light body weight, yet sluggish acceleration. It has a relatively high top speed for its class, however.

Like the regular Speedo, the Clown Van is powered by a high-torque V8 diesel engine, with a 5-speed gearbox in a rear-wheel drive layout. The engine sound is the same, also shared with vehicles like the Burrito and the Pony. The van has unique backfire effects and sounds when crashing or constantly bumping with the road, being clown-themed sounds.