• ­Get in the car with Armando and Henrique.

• ­A rival gang is attemting to steal the shipment. Take them out.

• ­Wait your friends to get in.

• ­Escort the shipment back to your lockup.

Adriana: "If things are better now, then why are you always like this?"
Luis: "Right, but you take the money, right? You take the fucking money every time."
Adriana: "Get out of my house. What choice do I have? I lost my job."
Luis: "Yeah well, call one of your other kids. The one you ain't ashamed of."
—Adriana, arguing with Luis.

Clocking Off is a mission given to Luis Lopez by Armando Torres and Henrique Bardas in The Ballad of Gay Tony.

The mission begins with a cutscene showing Luis' Mom serving food to Armando and Henrique. She argues with Luis about trying not to be like his dad. Once it ends, the player has to drive Armando's Cavalcade to a location near the bridge in Bohan. When they get there, a shipping of heroin will be loaded into the Cavalcade. As soon as this happens, a rival gang armed with Carbine Rifles shows up and attacks the player. Once they are killed, the player follows Armando to a garage in Northwood and the mission will end and show the players 100% results.

Complete the mission in 5:00
Take less than 40% Damage
Kill 20 enemies via headshot
Have 55% accuracy 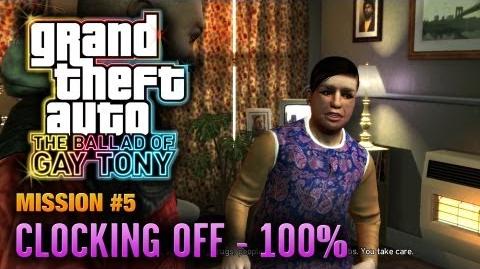 Retrieved from "https://gta.fandom.com/wiki/Clocking_Off?oldid=1288173"
Community content is available under CC-BY-SA unless otherwise noted.