Standard White - 100%
“In the 50's, the Vapid Clique was one thing an anxious parent didn't want to see pulling up outside the white picket fence on prom night. That haze of postwar confidence and unfiltered cigarette smoke meant only one thing - and you could be sure its intentions were not honorable. This lovingly reconstructed model brings modern power and modern reliability, without losing a single drop of the dog whistle bigotry that makes this car the classic it is.”
— Legendary Motorsport description.

The Vapid Clique is a vintage muscle car featured in Grand Theft Auto Online as part of the continuation of the Arena War update, released on December 25, 2018, during the Festive Surprise 2018 event.

The Clique is based on the 1951 Ford, more specifically the custom Ford Coupe owned by Bruce Leven. By removing side trim and adding Bespoke Straps to the hood and trunk, one can make the vehicle further resemble the aforementioned custom car. It also has some elements derived from the Volvo Amazon, such as the side trim and rear.

The Clique is depicted as a vintage coupé featuring race components. The front end is dominated by the chrome grille, with protruding turning lights on either side. Two circular headlamps can be seen on the outer edges of the car. On the sides, chrome lines can be seen running through the car, as well as exhaust pipes placed within the bodywork, near the rear wheel arches. In the greenhouse area, circular rear-view mirrors can be seen mounted on the doors, along with chrome trim around the windows. Another set of chrome strips can be seen on the rear. The rear end is very simplistic, featuring two red tail lights on the outer edges and the split rear vent at the bottom. Again, more chrome trim can be seen around the lights and the rear vents, as well as above the license plate. The interior features custom race seats prominently seen on Race vehicles. A dial cluster panel can be seen above the steering column for the driver, along with three central gauges facing to the driver.

The bodywork, interior, and the stitches on the steering wheel are painted with a primary color, while the floor, sides and roof are painted with the trim color. The Clique uses custom Atomic tires with unique rims.

For a 50's vehicle, the Clique has remarkable speed and handling around corners, and handbrake can be easily used to make tight turns without issues. If given full suspension upgrades, the Clique's wheels will have negative camber, further improving the car's turning radius.

The Clique is powered by a single-cam V8, fitted with double-barrel carburettors on it. The engine is coupled to a 4-speed gearbox in an FR layout. Its engine sound is the same as muscle cars like the Gauntlet and the Sabre Turbo. 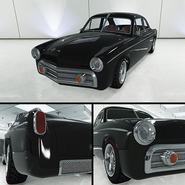 The Clique on Legendary Motorsport. 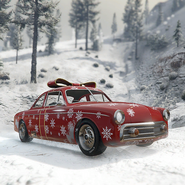 The Clique on Rockstar Newswire.

The Clique on the updated Rockstar Games Social Club.

The Clique in the cinematic preview on Rockstar Games Social Club. 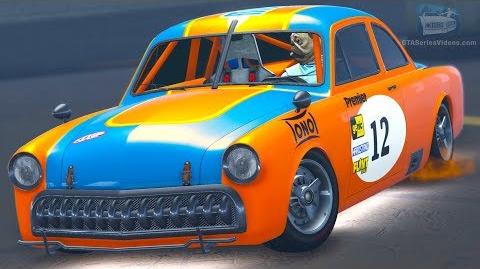