Clinton Residence as it appears in Grand Theft Auto V.

One vehicle and Motorcycle

The safehouse is located on Forum Drive, Strawberry, and is unlocked after Franklin and Lamar.

The safehouse is a single-story bungalow in which the player can save their game in Franklin's bedroom, on the first door to the left of the front door. Across the hallway is a small living room with a television that can be interacted with and a supply of joints that Franklin can take a hit from. The living room leads on to a small kitchen, where Franklin can drink a beer or use a first-aid kit. A door leading to the back garden can be found in the kitchen, but cannot be used. The interior of the house is characterized by its retro design and decorated with various spiritual and tribal ornaments and artwork. A garage can be found to the left of the property, which is large enough to store one car and one motorcycle (Franklin's Buffalo S and a Bagger obtained in an early mission spawn in the driveway). When replaying a mission (after beating The Hotel Assassination, depending on the mission if Franklin is by his house), Franklin can enter his house and find his room cleared out (since he moved to Vinewood Hills). Chop's kennel can be found in the back garden. The radio station playing inside the house is Radio Los Santos.

At the beginning of the game, Franklin Clinton lives here with his aunt Denise, after they inherited the house in Franklin's grandmother's will. A short time later, Franklin agrees to take care of Chop, a Rottweiler belonging to his friend Lamar Davis, and Chop soon starts living at the house with Franklin and Denise.

Following Franklin's move to 3671 Whispymound Drive, Vinewood Hills after the Hotel Assassination, the house is turned into a 'center for women' by Denise Clinton, and both the house and garage are made inaccessible to the player (PS3/Xbox 360). In the enhanced version of the game, the garage remains accessible to the player but the house cannot be accessed. After Franklin moves out, Denise will send him an e-mail forbidding him from re-entering the house. Once he has replied, Franklin tells her that the only mistake that his mother made was giving her the house and he tells Denise to stay away from him.

After Franklin moves to his new safehouse, he can sometimes be seen on Forum Drive driving away from the house, indicating he was returning to retrieve some of his belongings or to make sure his aunt hadn't done anything drastic to the house. If he returns to the house, the front door will be locked and Denise will shout from inside, telling Franklin to go away. The two may exchange a few words.

Clinton Residence as seen on the GTA V official website.

Franklin's bedroom before he moved out.

Another view of Franklin's bedroom.

Franklin's bedroom after he moved out.

Another view of the living room. 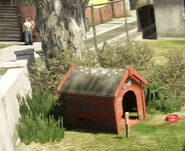 Chop's doghouse.
Add a photo to this gallery

Retrieved from "https://gta.fandom.com/wiki/Clinton_Residence?oldid=1322062"
Community content is available under CC-BY-SA unless otherwise noted.