Standard White - 100%
“There's only one reason to buy a Cliffhanger, but it's all the reason you need. As it sits there between your legs, throbbing gently, a roar of ecstatic virility only a flick of your wrist away, you realize that this is far more than just a series of transparent innuendos: it's the pneumatic appendage you've always dreamed of.”
— Southern San Andreas Super Autos description.

The Cliffhanger is based on the Harley-Davidson XR-750, evidenced by the overall design and purpose.

Similar to the Gargoyle, the Cliffhanger assumes a chopper-like appearance and is fitted with rugged off-road tires. The bike sports two small circular headlights mounted under the front panel, a slim fuel tank with a speedometer on it and a rear swingarm equipped with two shock absorbers on either sides (in a similar manner to bikes like the Angel or the Wolfsbane). On the rear, there is a red light located on the left side, whose case's color is determined by the primary color.

In contrast to the Gargoyle's wide appearance, the Cliffhanger looks much thinner, similar to the Hexer in that aspect.

The Cliffhanger has proficient speed and handling, and is proven to be a worthy vehicle to compete in races, even rivaling the Gargoyle, which is also a racing motorcycle. It can also pull a wheelie at top speeds with no issues and can even pull a stoppie at the furthest distances there is. 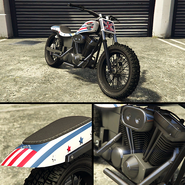 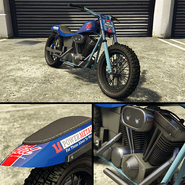 The Cliffhanger on the updated Rockstar Games Social Club.

The Cliffhanger in the cinematic preview on Rockstar Games Social Club.

A Cliffhanger seen ramping a Vapid Slamtruck in an advertisement.