Client Jobs are missions in Grand Theft Auto Online added in the After Hours update continuation on 14 August 2018.

They are given to the GTA Online Protagonist by Paige Harris through her touchscreen computer terminal in the Terrorbyte.

After purchasing a Terrorbyte, Paige will contact the player and introduce her touchscreen computer which, along with being able to hack into existing underground business networks the player owns, has a menu option to launch her jobs.

There are six jobs. Four of them can be done alone, while two of them require at least two players. Two also require the Drone Station for the Terrorbyte. 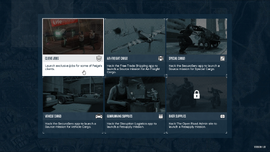 The menu option on the touchscreen.