Cleethorpes Tower is located on Columbus Avenue, bounded by Bismarck Avenue to the east, Manganese Street to the south and Nickel Street to the north.

The modernist tower is stated in peepthatshit.com as a building that "was built by Lyle Cleethorpes V purely to demonstrate to the world his great wealth. As a filthy-rich heir to a, quite frankly, awful family, fame obsessed Cleethorpes will do anything to get his face or name up in lights."

According to the in-game website, peepthatshit.com, the Cleethorpes Tower has a balcony on the top floor which is "Used by rich people to spit on poor people below." A Higgins Helitours tour guide also claims "millionaires can go to the top floor, lean over the marble balcony and spit on ordinary Americans".[1]

The building is the ninth tallest building in Liberty City, beaten by the GetaLife Building in Easton, just beating The Triangle Tower.

The tower is based on the Trump Tower in Manhattan, New York City. 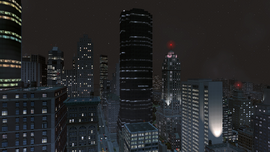 The building at night.
Add a photo to this gallery

Retrieved from "https://gta.fandom.com/wiki/Cleethorpes_Tower?oldid=1193311"
Community content is available under CC-BY-SA unless otherwise noted.