• ­Wait for your team to get on a Blazer Aqua.

• ­Take out the transport trucks.

• ­Deliver the Blazer Aqua to the drop off.

• ­Help deliver the Blazer Aqua to the drop off.

Out of lives.
Blazer Aqua(s) destroyed.

Reaching Rank 1.
Stealing and storing 12 vehicles in a vehicle warehouse.

"Mount a land and sea operation to wipe out the Lost Motorcycle Club's methamphetamine operation in Blaine County with Amphibious ATV's."
―Description

Cleanup Op is a Special Vehicle Work mission in Grand Theft Auto Online, added as part of the GTA Online: Import/Export update. It is the "Blazer Aqua Mission".

The Assistant tells the players to go to Grapeseed and take the Blazer Aquas, while stating that a special interest group approached SecuroServ saying that The Lost MC are running a methamphetamine operation out in Blaine County and a client of the group wants the operation eradicated. After reaching to the provided Blazer Aquas, the assistant will specify that they must destroy their supply trucks.

The first area is on Millar's Fishery at the North Coast of the Alamo Sea and the second one down the Zancudo River at Lago Zancudo. The first one has six trucks, which are guarded by armed enemies that will attack once the first truck is destroyed. Once they are destroyed, the players must travel to Lago Zancudo and eliminate four more transport trucks that are on the move. Since enemies will spawn on the roads, players must be careful while moving to the second destiantion.

Once the second group of trucks are destroyed, the assistant informs that the Lost members are in boats along the western coastline and the clients wants to pursue and eliminate them. Once the task is done, the players must deliver the Blazer Aquas at the Vespucci Helipad in La Puerta, completing the mission. 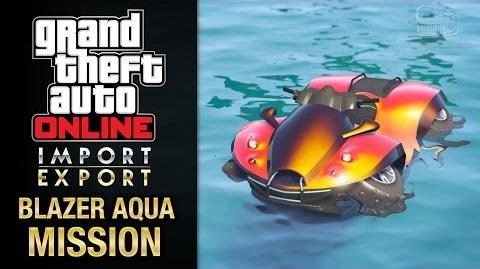 Retrieved from "https://gta.fandom.com/wiki/Cleanup_Op?oldid=1061498"
Community content is available under CC-BY-SA unless otherwise noted.