The team taking Anna back to Madrazo's house.

Rescue Anna from the The Lost MC

21:00
“The Lost have set up a brothel at an abandoned motel in Grand Senora. We have our own operations, and I don't like to think how this one is being run. If it's not up to standards, the cops will come down on everyone. Can you go down there and take out the bikers. Bring the girl they're using to me, and we will see she's looked after.”
— Description

Cleaning the Cat House is a mission in Grand Theft Auto Online given to the player by Martin Madrazo. It is available from 1 to 4 players.

The team must rescue a hooker named Anna from the Lost MC at an old semi-abandoned motel in the Sandy Shores. She can be found upstairs in the third room on the left. The team must confront a lot of the Lost MC members to save the girl. She must then be taken to Madrazo's house whilst being followed by the Lost on bikes. 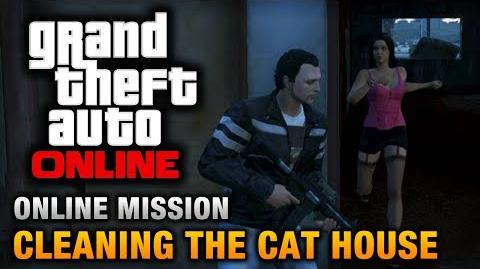