Cleaning out the Bureau

Cleaning Out The Bureau

In-game time
Cleaning out the Bureau is a mission in Grand Theft Auto V given to protagonist Michael De Santa by FIB agent Dave Norton, although it appears under Lester Crest's list of missions. It is the first part of the fifth heist mission.

Michael arrives at Darnell Bros. where he meets Lester. Soon, the duo are joined by FIB agents Dave Norton and Steve Haines. Haines explains that evidence regarding his illegal activity is starting to surface at the FIB as his detention at the hands of IAA has exposed him; he needs Michael to destroy that evidence, but the only way to do so is by breaking into the FIB Headquarters. Haines promises that if Michael performs this favor, he will personally delete Michael's FIB files. Michael tells Haines that this is the last job he will perform for him. Haines blithely agrees and he and Norton leave.

Michael and Lester drive to the FIB Headquarters. On the way, Lester lays out his plan. They will gain entrance to the building by assuming the identity of one of the building's janitors. Lester even has the man picked out, one Harvey Molina. Michael and Lester arrive at the exit of the Headquarters' parking garage. When Molina leaves the garage, the two follow him to his apartment on Las Lagunas Boulevard in West Vinewood. Michael follows Molina into his apartment, and purchases Molina's ID and overalls. Molina agrees and Michael leaves.

Michael and Lester return to Darnell Bros. where Franklin is waiting. In addition to Molina's ID and overalls, Lester also needs a physical copy of the architectural plans for the FIB Headquarters. These are in the possession of Chip Peterson, the building's designer, who has an office in Backlot City. Franklin agrees to tail Peterson to get the plans. Their business, for the moment, concluded, the mission ends.

Main article: Cleaning out the Bureau/Soundtrack 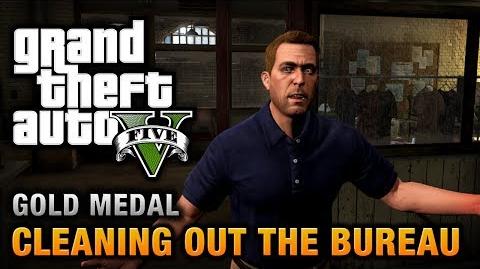 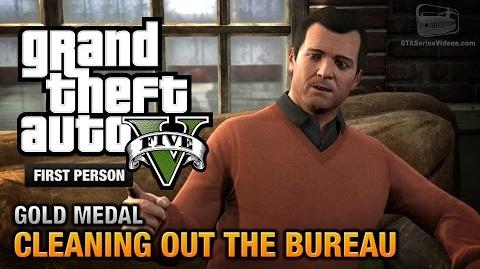 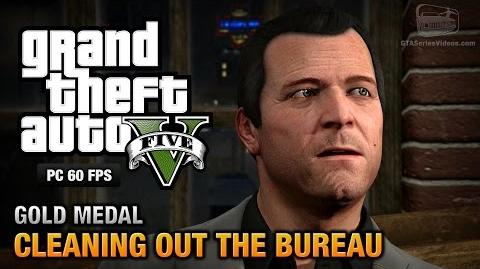