GTA Wiki
Register
Don't have an account?
Sign In
Advertisement
in: Missions, Missions in The Lost and Damned, Introductions
English

The mission as seen in a pre-release screenshot.

Clean and Serene is the opening mission of The Lost and Damned, given to protagonist Johnny Klebitz by Billy Grey.

A cutscene plays showing the main members of The Lost MC motorcycle club leaving their clubhouse and riding through Alderney to meet club president Billy Grey, who has just been released from a court-ordered rehab. The members arrive at the Westdyke Memorial Hospital, where they see Billy speaking with his parole officer and his sponsor from the drug treatment program. Billy's parole officer and sponsor leave, before Johnny Klebitz, the club's Vice President and the protagonist of the DLC, walks up to Billy and hands him his motorcycle jacket.

Billy gets on the back of Johnny's bike and the members ride back to the clubhouse. Once they arrive, the club members celebrate Billy's return with some drinks. However, the mood changes when Billy questions Johnny over the location of his bike, with Johnny explaining that he offered it to the Lost's rivals the Angels of Death as a peace offering, and also to pay for Billy's legal fees. Billy demands that Johnny retrieves the bike, which leads to another argument. Eventually, both men calm down and agree to retrieve the bike. Outside the club, Jim Fitzgerald reveals that they had asked mechanic Pretty Boy to store the bike, so the members ride to his garage in Industrial. When they arrive at the garage, Johnny and Jim ask Pretty Boy for the bike, but Pretty Boy denies knowledge of the bike's whereabouts. However, Billy reappears, and prompts Johnny and Jim to "extract" the information out of Pretty Boy. Jim starts up a bike and Johnny forces Pretty Boy's face against the rear wheel, cutting his face. At this point, Pretty Boy admits that the Angels of Death took it to a scrapyard in Northwood, Algonquin. Johnny, Jim and Billy leave to retrieve the bike, but not before Billy breaks Pretty Boy's jaw with a hammer in a final act of brutality.

Now the leader again, Billy drives out of the scrapyard and leads the remaining members back to the clubhouse in Alderney. When they return, the mission is completed. 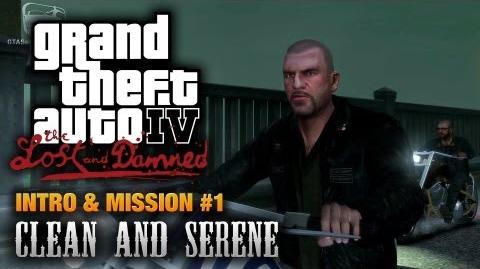