• ­Go to the subway station.

• ­Go up to the station platform.

• ­Wait for the train to arrive.

Hung Out to Dry

Ivan the Not So Terrible

Clean Getaway is a mission given to Niko by Vlad Glebov in Grand Theft Auto IV. It introduces the abilities of using the Subway and the Car Wash.

When Niko Bellic enters Comrades Bar, a little celebration is happening inside the bar, among the people celebrating is Mel and Muscovski. Vlad asks Niko to go on a walk with him to his car nearby. On the way, he shows his displeasure for homeless people by shouting at them for no reason or pushing them. When the pair reach Vlad's Marbelle in a car park, Vlad takes out some cocaine (said to be mixed with laxatives) who says he got it from someone called Mikhail. He then tells Niko that Mikhail has a problem with a man called Jimmy. Jimmy hasn't paying his debts recently, so he wants to show him that he means business. He wants Niko to steal his car, which is parked at the Steinway projects in Steinway, Dukes. He then tells Niko to use the subway to reach there.

Take the marked train at Hove Beach station that goes to Dukes Boulevard station; once at Dukes Boulevard station, go down the stairs. Steal the silver Blista Compact, which is just parked nearby. If the player meets the chance, hit Jimmy with a stun punch by surprise and take his car, prompting one of Jimmy's friends to pursue after Niko. If Niko has completed "Jamaican Heat" or have acquired a pistol by some other means, he can also shoot Jimmy by any choice; whether Jimmy lives or dies will affect the phone conversation with Vlad, but won't affect the ability to complete the mission. Engaging Jimmy and his friends is optional; if Niko instantly heads to and gets in the car and drives away fast enough to not be pulled out of the vehicle, the player will encounter no resistance for the rest of the mission (unless the player times the snatch poorly and a police car is alerted in which case the usual evade procedure needs to be followed, except without the option of ditching the stolen car, though this happens rarely.)

Dialogue will be affected if Niko chooses to stun punch Jimmy, simply take the car and drive away, or kill him.

Once in the car, Niko then calls Vlad, saying that the car is dirty. Vlad then tells Niko to take the car to a car wash nearby, then take it back to his lockup. It costs $5 to use the car wash, so after it's been cleaned, drive it to Vlad's lockup. If the car is damaged, there is no need to worry as that will not affect the mission, but the car must survive the trip to the lockup without catching fire or stalling from damage.

Vlad will call Niko after the mission, regarding "a hot date" (presumably with Mallorie) where he drives the Blista Compact which Niko has just stolen. Depending on the condition of the car, Vlad's call will differ.

If the car is delivered undamaged, Vlad will mention that Niko did well "for a peasant" and will also say that the car should impress his date. Niko will return that she would not be impressed by his appearance, so the car would help.

If the car is delivered damaged (all windows broken, tyres flattened, engine producing dark grey/black smoke) before parking it, Vlad will call Niko complaining that the car "was a piece of shit". Niko will retort that "the car was clean, wasn't it?" and hang up.

This section/page depicts all cutscenes and dialogues in the mission "Clean Getaway" in Grand Theft Auto IV. 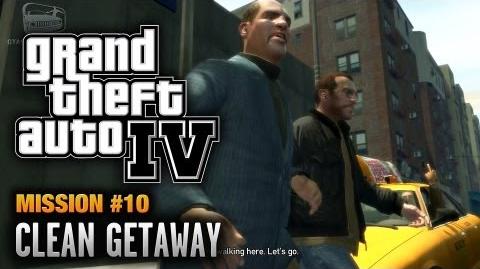 Retrieved from "https://gta.fandom.com/wiki/Clean_Getaway?oldid=1193997"
Community content is available under CC-BY-SA unless otherwise noted.