View source
For other characters with the name Claude, see Claude (disambiguation).

Scott Maslen (Actor in the movie)

Little history is given for the character in GTA 2; however, DMA Design had previously released a promotional movie for the game, which was also compiled into the opening cinematic of the game, depicting a live-action rendition of Claude Speed committing several criminal acts, similar in all Grand Theft Auto games. In the movie, Claude is seen performing jobs for several crime bosses, before being killed by an assassin sent by the Zaibatsu Corporation, whose van and merchandise were previously stolen by Claude. Close inspection of Claude Speed's rap sheet in the intro movie reveals that he is 28 during GTA 2, which is either set in 1999 or 2013.

During the course of the game, Claude starts his career as a simple thug, however, he was soon hired by the major gangs that controlled Anywhere City. Claude secretly worked with all of them and in the end managed to kill all of their leaders, and later flees the city with the money he earned. Claude goes to prison during the mission Penal Ties! on orders of Rednecks leader Billy Bob Bean.

The movie rendition of Claude Speed was portrayed by English actor and model Scott Maslen. In the film, Claude is first casually walking down the street before breaking into a run when he discovered himself being chased by a large group of people. He escaped by stealing a van owned by the Zaibatsu Corporation, which earned him a mark for death from the Corporation's higher-ups. Over the course of the film Claude's various exploits are shown, including driving while taking drugs, getting into a police chase, getting a car sprayed, drug running, and rescuing a group of trapped people dressed as monks from a van and killing the owner.

The film opens with overhead scenes of a city as police chatter is heard, revealing that criminal has evaded them. It then cuts to Claude Speed striding on the streets, only to be chased by a group of armed gang members (implied to be Rednecks, based on their choice of baseball caps and plaid shirts; one of them is wielding a chainsaw). Looking to escape, Claude carjacks a parked van, throwing its occupant out and driving the vehicle away, shaking off his pursuers.

"The Assassin is activated"

While in the van, Claude, to his joy, discovers boxes of Zaibatsu Corporation drug shipments inside. With his newly discovered loot, Claude stops to break into a black sedan, load a few of the boxes into its trunk, and takes off in the stolen car, abandoning the van. However, Claude's act has been reported by the driver of the van to the Zaibatsu, and an informant depicted as a homeless person updates the Zaibatsu on Claude's whereabouts and change of vehicle. The Zaibatsu Corporation promptly obtains a record of Claude, and dispatches an assassin (who doubles as a janitor in the company) to kill Claude.

Meanwhile, Claude discovers a police car tailing him, resulting in a chase that lasts for a period of time. After the police car spins out of control, allowing Claude to escape, Claude seeks refuge in a paint shop, where his car is resprayed with a white body color. This allows him to slip through police detection, and continue to go about his business.

Claude arrives at a hideout for a group of Russians at a harbor, demanding that they help him kill a member of the Rednecks. As the Russian mob boss is about to turn him away, Claude produces two packets of the Zaibatsu drugs to the boss. To the boss' approval, the deal is sealed. As Claude heads to his next destination, he decides to consume some of the drugs himself, with less-than-desirable results...

Still under the influence of the drugs, Claude makes another stop, this time an underground Yakuza haunt, where an unknown individual is in the process of being tortured with baseball bats. With two boxes of Zaibatsu drugs to show, Claude is asked by a Yakuza boss to help locate and rescue a fellow associate, in exchange for a monetary reward. Claude complies and leaves, as the tortured prisoner is bludgeoned in the head with a hammer by the boss.

"Shoot him when he's down"

With the Yakuza boss' order in mind, Claude locates a step van stopping at an intersection, exits his car and guns down the driver, shooting him three times and spitting on him. Claude then proceeds to open the van's cargo hold, revealing a group of people dressed as monks, presumably meant to represent the Hare Krishna gang. Claude finds his man, and returns him to safety, where Yakuza members greet him with open arms. Claude leaves to prepare for his next job as night approaches.

Using the step van acquired in his last mission, Claude arrives at a storefront to pick up the Russians, as promised. They are heading to a bar where Elvis is performing a gig; the bar scene reveals Redneck members with Yakuza members celebrating the recent rescue of their cohort. Claude and the Russians arrive, as Claude paves the way for the Russians to storm in and provoke a firefight that presumably results in casualties on all sides. Claude walks away with a grin on his face as a Russian is seen gunned down.

"Crime does not pay" and death

As Claude attempted to hijack a parked car on the street, the assassin sent by Zaibatsu approached him from behind through a darkened back alley and shot him three times in the back with a silenced pistol. Claude was thrown forward by the impacts from the bullets and, with no time to react, he looks down at himself in shock and briefly seems to brush the hood of the car in an attempt to stay upright before falling backwards onto the pavement and presumably dying from a combination of lead poisoning, blood loss and paralysis from shattered vertebrae.

Claude Speed is a sociopathic character with little to no moral conscience of his actions. He will work for anyone who will give him the needed money or resources and will be ready to manipulate, betray or attack anybody who is between him and his goals. Part of his bold character depicts him mocking or spitting over enemies he has killed.

He also worked for various gangs simultaneously, managing to manipulate each of their leaders, turning them against each other and, in the end, eliminating them all. He is an expert of a variety of weapons, from simple pistols to even rocket launchers. He's an avid smoker (as seen in-game) and drug user as well.

The movie's version of Claude Speed shares some generic physical characteristics with Claude of the 3D Universe games, including: his black jacket (made of cloth in GTA 2 and leather in Grand Theft Auto III and Grand Theft Auto: San Andreas); t-shirt (white color in GTA 2 and black in GTA III and GTA San Andreas); cargo pants (black color in GTA 2 and dark khaki in GTA III and GTA San Andreas); and slicked hair. The movie version, however, was also depicted speaking and displaying an array of emotions, a characteristic never seen with the Claude from the 3D Universe.

In GTA 2, Claude Speed's in-game name is simply given as a myriad of nicknames from nine bosses of seven gangs:

Claude Speed, as seen in the movie.

Claude Speed clothed as a prisoner during the Penal Ties! mission.

Claude disguised as a police man. The player will look like this during certain missions. 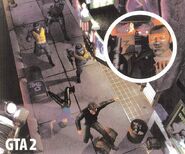 Render of Claude Speed (resembling his movie counterpart) escaping from the police seen on gaming magazines.

Render of a cop electrocuting Claude Speed with a ElectroGun, seen on gaming magazines.