"Motherfucker! That mute asshole! That fucking snake without a tongue! Gave me this shithole instead of a pink slip? I must be the biggest fucking idiot in the whole fucking world!"
―Carl Johnson getting angry at Claude for giving him a run-down garage, in Wear Flowers in Your Hair, GTA San Andreas.

Claude is a mute criminal with an unknown background. Originally owning a garage in San Fierro, he later loses it to Carl Johnson in a race and flees to Liberty City with his new girlfriend Catalina. However, she eventually betrays him and leaves him for dead during a bank robbery, leading to his desire for revenge. He then works for various criminals and gangs in the city's underworld to track her down and kill her, but along the way many of them become hostile towards him, leading Claude to become one of the most infamous criminals in Liberty City, with most gangs wanting him dead by the end of the game.

Nothing is known about Claude's life. Rockstar Games, however, has stated that by 2001, Claude is definitely a drifter, probably from the west coast, new to Liberty City, with no known family and that his surname may or may not be Speed.[1]

By 1992, Claude was as a top contender in an illegal racing ring and owned an abandoned garage in Doherty, San Fierro. He became involved with Catalina, who had recently split up with Carl Johnson, before racing CJ in a losing effort. Following the loss, he hands over his garage to Johnson, before leaving San Andreas with Catalina. The two head to Liberty City where they embark on a nine year crime spree ending with Catalina's betrayal.

At the start of the game, Claude and Catalina robbed a bank in Liberty City. Catalina, however, turned on her boyfriend, shooting him and leaving him for dead, justifying her decision with "I'm an ambitious girl, and you're just small time". Claude is arrested by the Liberty City Police Department. He is convicted of all charges and is sentenced to ten years in prison. While being transferred to a prison in Portland View, Claude escapes from a police convoy after the Colombian Cartel attack the convoy to free the Oriental Gentleman. Claude and 8-Ball escape to a safehouse in the Red Light District, before moving on to Luigi's Sex Club 7. Luigi Goterelli, the owner, gives Claude his first job in the city, to drive Misty from the hospital back to the club.

Claude, successful in his errand, continues to be employed by Goterelli, who also has him kill a drug dealer and two pimps, before having him drive Misty to Joey Leone's Garage. Claude then begins to work for Joey, killing both Mike Forelli and Lee Chong, before chauffering Toni Cipriani, later working for him against the Triads, principally killing three Triads warlords. Claude, impressing the Leone Family hierarchy, is introduced to the Don, Salvatore Leone. Salvatore, 'seeing nothing but good things' for Claude, has him looking after his 'girl' Maria for the evening, kill Curly Bob (who was selling secrets to the Colombian Cartel, now co-led by Catalina) and later destroy a freighter used as a factory for the drug SPANK. During this time, Claude also works for El Burro, the leader of the Diablos, helping him on various tasks, and Marty Chonks in his attempts to get out of his various problems.

After destroying the Cartel freighter, a paranoid Salvatore attempts to kill Claude by having him enter a bomb-laden car. Salvatore's wife Maria, however, pages Claude and directs him to a small pier where the two meet Asuka Kasen, co-leader of the Yakuza, and flee to Staunton Island after Maria had told her husband that she and Claude were an "item". Asuka, unconvinced of Claude's loyalty, has him kill Salvatore Leone to prove himself, before having him kill a number of other people causing her problems. She later introduces him to her brother Kenji and Ray Machowski, a corrupt police man working for the Yakuza. Claude helps Kenji with his problems, including settling debts and freeing a man from prison, and helps Machowski in his attempts to remain unnoticed, eventually helping him flee the city by the airport.

Later Jobs and The Exchange

Claude continues to look for work and finds employment with King Courtney, who has him attack the Diablos before attempting to kill him on orders from Catalina, and Donald Love, who has him kill Kenji Kasen disguised as a Colombian Cartel gangster in a Cartel Cruiser to provoke a war. Asuka, unaware of Claude's role in her brother's death, launches an assault on a Cartel-controlled building site and begins to torture Miguel, co-leader of the Cartel, into giving away Cartel secrets. Armed with the information, Asuka sends Claude on various missions to hurt Cartel operations, including stopping the selling of and stealing a shipment of SPANK. Claude briefly finds employment with D-Ice, leader of the Red Jacks sub-sect of the Southside Hoods, and attacks the rival Purple Nines into defeat. Claude returns to the building site and finds that Asuka and Miguel are both dead, whilst a ransom note from Catalina, wanting $500,000 for Maria, is left for him.

Claude goes to the Cartel mansion, escapes an ambush, destroys a helicopter piloted by Catalina, thus killing her, and rescues Maria. As they depart from the Cochrane Dam after Catalina's death, Maria starts a long and annoying speech which certainly irritates Claude. Maria's fate is then left unknown as the screen fades to black while she is talking, before a gunshot is fired and she stops talking.

What happened to Claude after the events of GTA III is completely unknown. Rockstar Games' official response in 2011, however, was that "He certainly isn’t dead. What else became of him, we don’t know".[2]

Claude is a calm and serious man who appears almost emotionless regardless of the situation, aside from a slight smirk and usually a glare, seemingly taking everything in stride. Provided he is paid for his services, he will take orders from his bosses without reluctance or complaint, usually giving a nod to show that he understands, and doesn't respond even when he is scolded or shouted at by his bosses for doing something wrong. He also prostrates to his bosses if required, in Kenji Kasen's case.

Ironically, Catalina states that she betrayed Claude for his lack of ambition, and yet throughout the game, Claude works, kills and rises through the ranks of the Liberty City underworld, all just to get his revenge. Because Claude never verbalizes it, it's unclear if he has any true loyalty or respect to anyone. As long as he is paid and it will get him closer to getting revenge, he will work for, and kill, anyone, as evidenced by him killing Kenji Kasen. He even fights on multiple sides of gang wars, working for the Mafia, the Diablos, the Yakuza, and the Yardies, completely without hesitation and goes as far as to orchestrate a gang war between the Yakuza and the Columbian Cartel along with Donald Love.

It should be noted that when Claude does kill one of his former bosses, it's usually those who mistreat him or betray him like Kenji or Salvatore Leone, implying Claude doesn't take slights against him lightly, explaining why he is more than willing to kill them. His vindictive side is further evidenced when he coldly leaves Miguel to be tortured by Asuka Kasen, for his part in Catalina's betrayal. He does appear to at least have an amicable relationship with Asuka and Maria, since Asuka is willing to help Claude in his goal for revenge when she learns about Claude's history with Catalina.

For the vast majority of the game, Claude is taciturn and doesn't speak. He will only make a slight grunt when he is hurt, or an "Oh!" whenever he drowns, gets shot, run over, or when he falls down. He may also give passing vehicles the middle finger when crossing the road. There are moments where despite not talking, Claude will let his actions or behaviour speak for him, such as appearing taken aback and flinching slightly when Kenji yells at his face, or visibly reacting in surprise when Maria tells him that she told Salvatore that they slept together, the aforementioned leaving Miguel to his fate, and seemingly attempting to intimidate Carl Johnson when the latter has an argument with Catalina over a racing prize.

Claude remains true to his mission of finding and taking revenge on Catalina for leaving him for dead, even showing the slightest bit of pity for Maria when he allows her to live after freeing her and that saving her was at least part of his priorities, only to possibly kill her himself. It's also clear that Claude is primarily out for himself and will use people for his own ends or benefits until he no longer sees a reason to use them anymore; which more often than not ends with Claude killing them.

Worth noting is that Claude may possess a simple, almost childish sense of humor. In all of the missions given by Kenji, Claude engages in the preemptive bow with great enthusiasm, so much so that, during the final mission, he does it without even realising Kenji is yelling at him. Likewise, in San Andreas, he's shown some degree of enjoyment in making CJ feel uncomfortable in his presence.

Claude is a tall Caucasian male in his late twenties to early thirties. He has a somewhat muscular build with brown hair and a faint 5 o'clock shadow. He always wears a black leather bomber jacket with bronze zippers with a black T-shirt underneath, green cargo pants and blue sneakers. During Give Me Liberty, Claude wears a baggy orange prison jumpsuit with rolled-up sleeves.

In the PC version of GTA III, there is an alternate outfit consisting of a brown leather jacket, blue jeans, white sneakers and a brown mustache. Aside from that, Claude is the only 3D-era protagonist (except for Mike) that wears the same clothes throughout the entire game.

Claude's appearance in San Andreas is very similar, though he has a more youthful and detailed face. He is clean-shaven and his hair is styled almost exactly like it was in III however his long sideburns are missing.

His clothes consist of a re-skinned black biker jacket with a black T-shirt, olive cargo pants and white and black sneakers.

His appearance in Grand Theft Auto V as a parent for the online character is significantly different from his previous counterpart. Like in San Andreas, he is clean-shaven and has a slightly pale complexion. He wears a black leather jacket with a black T-shirt underneath. The jacket, however, is slightly different from its previous renditions. His hair, instead of the usual spiky fringe, is instead styled into a faux-hawk. His face has been structured into a perpetual frown, with a stiff, grumpy brow. Additionally, when chosen as a parent, if players choose to have their character resemble him more, they can, in spirit, play as a customizable "pseudo-Claude" in GTA Online, who can wear any outfit or hairstyle they choose for him.

This is a list of crimes comitted by Claude in both GTA: San Andreas and GTA III, as well as other crimes that the player may commit while playing as Claude.

Claude's alternate appearance in the PC version of GTA III. Note the mustache and goatee.

Claude in "Give Me Liberty".

Catalina betrays Claude in Give Me Liberty

Claude in The Exchange before the deal. 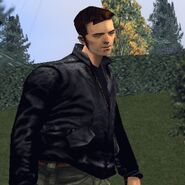 Claude as seen in The Exchange.

Claude fighting his way in The Exchange.

Claude giving a finger to a driver.

Misty and Claude as Online parents. 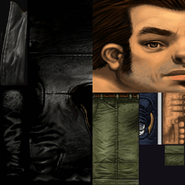 Claude's skin in the game files. 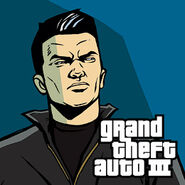 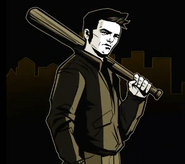 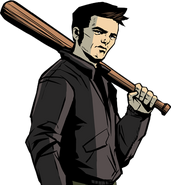 Retrieved from "https://gta.fandom.com/wiki/Claude?oldid=1291326"
Community content is available under CC-BY-SA unless otherwise noted.