Civilization Committee Complex, Liberty City
“The World Is Ours.”

The Civilization Committee (CC) is an intergovernmental organization and military force in the HD Universe, acting as the in-game lore equivalent of the United Nations.

Described as a "largely ineffective organization where representatives from nations around the world are supposed to decide on the best course of action in the event of an international conflict",[2] the CC's presence in the game is intended to satirize the various shortcomings of the United Nations in real life. The CC is ridiculed for doing little in international affairs, while organizing lavish meals (when parts of the world suffer from starvation) and failing to pay parking tickets.[2] For these reasons, the United States Administration "wisely" ignores the CC. The view of their building from the Humboldt River is claimed to be "more significant" than the organization based inside.[2]

According to a billboard in Grand Theft Auto V, There is a partnership between the oil company RON and the Civilization Committee. Due to RON often being blamed for environmental pollution, this partnership could suggest the CC doesn't care about environmental protection.[3]

The CC Building (based on the United Nations Headquarters in New York City) is the CC's headquarters in Liberty City, located in Hatton Gardens on the shore of the Humboldt River along Albany Avenue. The complex consists of a tower which rises 510 ft. high and several other low-rise buildings and an assembly hall, similar to the UN headquarters. The complex also features a garden on the north end, where several sculptures are located.

The building is heavily guarded by the LCPD (armed with M4 Carbine Assault Rifles) and trespassing into the complex will result in a 4-star wanted level. Despite the dangers of entry into the complex, a unique stunt jump is situated within the area, where the player must jump off the roof of the complex's assembly hall and land in the garden below. The only civilians in the premises are the LSD cleaners maintaining the garden.

In Grand Theft Auto: Chinatown Wars, despite there occasionally being three Police Officers stationed at the entrance, no wanted level is gained on entry and Pedestrians freely roam the complex.

The Civilization Committee complex at Albany Avenue in Grand Theft Auto IV. The complex mimics that of the real life United Nations Headquarters, including its secretariat tower and General Assembly building.

The main entrance into the Civilization Committee complex in GTA IV, where the LCPD stand guard. 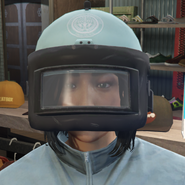 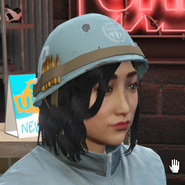