GTA Wiki
Register
Don't have an account?
Sign In
Advertisement
in: Pages with non-numeric formatnum arguments, Articles with sections under construction, New articles,
and 14 more

Standard White - 100%
“A fierce luxury sedan, the slick Cinquemila has more torques than its drivers have connections with Liberty City mobs. (That's a lot of torques).”
— Legendary Motorsport description.

The Lampadati Cinquemila (pronounced as Chin-que-me-la) is a luxury 4-door sedan featured in Grand Theft Auto Online as part of The Contract update.

The Cinquemila is based on the 2013 Maserati Quattroporte VI (M156). The arrangement of the front fascia and the vents below the lights are shaped as on the 2020 Jaguar F-Type (X152), while the sharp, inward-bent grille is shaped as on the 2014 Maserati Alfieri. The headlights, as well as the roofline and the sides, are similar to the ones found on the Tesla Model S. The rear is derived from the 2018 Mercedes-Benz A-Class Sedan (V177).

The vehicle assumes a sporty design and a four-door layout, where the front end features a painted extender/splitter, followed by an open intake above. On the upper area, the car bears a rounded grille with a chrome trim around and various vertical dividers that are finished in black, as well as side intakes with black surroundings. The car uses a set of modern headlamps with sharp edges on the outer sides, while the manufacturer badge can be seen above the grille. The bonnet features a bulged area on the centre and opens to reveal the engine bay, which bears the corresponding badges over the cam covers.

The sides of the car feature smooth lines passing through the doors and traditional side skirts, as well as chrome horizontal door handles. On the glasshouse area, there are chrome trims around the side windows and black inner separations, together with mirror shells with a black finish on the lower portions and a single roof fin.

The rear of the car consist of a small boot lid with a curved shape on top, the manufacturer badge on the upper area and the number plate between the inset portions of the same lid. The outer edges house large tail lamps divided into four units, where the upper ones work as the outer main lamps and the inner brake lamps, while the lower ones work as the outer indicators and the inner reverse lamps. On the bumper area, there is a section at the bottom that is finished in black, with dedicated mouldings for the dual-exit, dual exhausts. The interior and dial set are derived from cars such as the Schafter and the Tailgater, though bearing the manufacturer badge on the horn cap.

The primary colour of the vehicle is applied on the bodywork, while the secondary one is applied on the roof. It shares the same wheel design with the Pariah, being six main spokes with dual thinner ones between each main spoke. However, the rims are fully finished in chrome/silver, lacking the painted accents like the aforementioned car.

The vehicle is powered by a V-shaped engine, whose model is similar to the ones from cars such as the Paragon R and the Deity (emulating the W12 engine from the real-life iterations of the aforementioned vehicles). Said engine is coupled to an 8-speed gearbox and powers the rear wheels, and shares the same sound from the Komoda, being a higher-pitched variation of the one from cars such as the XA-21, the Jugular and the Vectre. 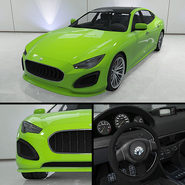 The Cinquemila on Legendary Motorsport.

The Cinquemila in the cinematic preview on Rockstar Games Social Club.