GTA Wiki
Register
Don't have an account?
Sign In
Advertisement
in: Characters, Characters in The Ballad of Gay Tony, Actors
English

Film actor
Unknown username. However he is constantly using it during Daisy's random encounter.

Unknown
“He's not gay, He's a virile man who takes an interest in personal grooming, and likes gladiators... but... yes, he's probably a bender, so anyway I got off with him, ended up getting taped, and now he's going to leak it online to prove he's straight. That wanker!”
— Daisy, about Chris.
“Who's gay now, bitches!”
— Chris, after premiering the sextape in Star Junction.

Chris Hunt is a celebrity in the Grand Theft Auto series who appears as a minor character in The Ballad of Gay Tony.

Chris Hunt is a 1990s action movie star visiting Liberty City, who is allegedly gay. The Celebinator claims that Chris likes "gladiators", which may either be a reference to a major film that he made or a gay stereotype. Daisy claims most of his films simply have him "beat people up and pretend to be straight".

Sometime in 2008 he had a fling with British socialite Daisy Cash-Cooze and videotaped her giving him a handjob, which he then posted online in an attempt to prove his heterosexuality to the public. Daisy bumps into Luis Lopez at Maisonette 9 and they hunt Chris down by tracking his constant posts on the Bleeter website (he updates several times per day, even just to say he is on the toilet or being tailored for a suit). In his last update, he claims to be premiering his new movie in Star Junction, when in reality he put the sex tape on the Weazel News mega screen for everyone to see, much to Daisy's embarrassment and Luis's amusement. Aside from Daisy's Random Character mission, he makes a cameo appearance within I Luv LC. During the opening cutscene Luis finds him walking down the corner of Gay Tony's house in Little Italy while talking to his mother and being distracted by a girl. This time Chris is dressed all in black. He later appears in the beginning of Ladies Half Price in Maisonette 9, where he is dancing with a girl near the bar. 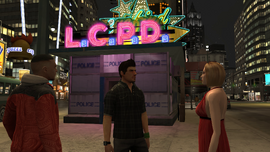 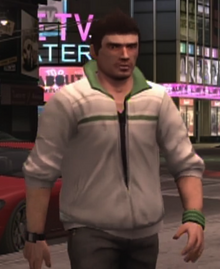