12:00:00
“Slept with a cop last night. Woke up with handcuff marks, stubble burn, and intel on a raid they're doing on one of my labs. Dunno which one, but the chopper coordinating's coming in from the North East. Ron's setup some dune buggies at a good vantage point for you. Find the cops, take 'em out, and bring any equipment they appropriated.”
— Description

Chopper Tail is a mission in Grand Theft Auto Online given to the player by Trevor Philips. It is available for up to 4 players.

The police are investigating one of Trevor's meth labs. Trevor doesn't know which one, but he has knowledge that a police chopper is coming from northeast, heading to the lab. Ron prepared a few dune buggies at a lookout on the top of a hill in Senora National Park just south of Sandy Shores, where the team needs to wait till the helicopter shows up. When the helicopter appears, the team will drive the buggies and follow the helicopter to the meth lab. Upon arrival at the meth lab in Great Chaparral, the team will need to eliminate a group of LSPD officers investigating the area, and then steal equipment that is in the back of a Granger after killing all of them. The team needs to deliver the equipment to Trevor's trailer. An FIB Granger with 6 NOOSE officers inside it will follow from the south and a Police Bike with a female officer will be stationed on Joshua Road to intercept and chase the team delivering the Granger.

The mission will always take place at 12 mid-day regardless of the in game time of day when the mission is launched and the clock will not advance during the job.

Tailing the Maverick in a Buzzard.

The equipment in the Granger. 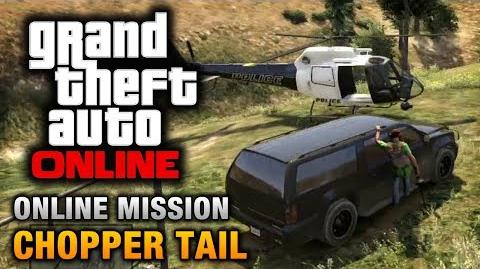