In-game time
“Our friend Ronald is getting increasingly agitated about Merryweather Security’s presence in the state, and a nervous Ron gets on my tits. Why don't you go to Sandy Shores Airfield, hack into the Merryweather Network, find their outposts and then take their choppers and blow 'em all to hell. Okay? Great!”
— Description

Chop Chop is a mission in Grand Theft Auto Online given to the player by Trevor Philips. It is available for 2-4 players.

Merryweather Security has made their presence known in the state of San Andreas, which has made Ron Jakowski nervous, true to his nickname. Trevor instructs the team to do something about it as Ron annoys him when he's agitated.

Trevor sends them to Sandy Shores Airfield, where there are many Merryweather Security Guards patrolling the airfield. The team must take them out. Once all Guards have been killed, the team is then instructed to hack into the laptop in the Airfield's control tower to discover the locations of Merryweather outposts.

Merryweather will try to take back control of the Airfield whilst a player is hacking, sending in reinforcements via land and air which the rest of the team must defend against.

Once the computer is hacked, the team is instructed to enter a Buzzard, which there are two of at the Sandy Shores Airfield's helipad. These are used to take out Merryweather's outposts, the first of which is at the communications tower behind the Vinewood Sign. To do this the team must destroy all of the vehicles, and kill all of the Guards stationed at the outpost. 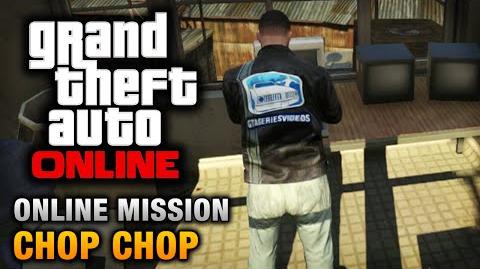