• ­Pulling Favors or
• ­A Starlet in Vinewood

"Lamar has a plan to make some extra cash."
―GTA V description on the Rockstar Games Social Club.

Lamar: "We gotta go pick up some shit from around the corner, man. We can walk and talk at the same time, my nigga."
Franklin: "Why the fuck we can't drive?"
Lamar: "Around the block? With Chop? You need to walk with your fat ass."
—Franklin and Lamar.

Chop is a mission in Grand Theft Auto V, given to protagonist Franklin Clinton by Lamar Davis.

Lamar's dog Chop makes his first appearance in this mission. In the mission, Chop helps Franklin track down and kidnap a Ballas member called D.

Franklin returns to his house and overhears his aunt and her friend going out for a jog. Soon after Lamar and Chop show up, Lamar tells Franklin to come along to "pick up some shit from around the corner". Franklin asks why they can't drive instead, but Lamar insists that they walk as it's not far. The three get in Lamar's van parked at the destination and Lamar tells Franklin to drive to Vinewood Boulevard.

After they reach their destination, they walk into an alley, where they find D chatting with a woman. Before being spotted, Franklin and Lamar both cover their faces with green bandanas. D notices them and a hostile conversation initiates. Lamar finally pulls out his pistol and aims it at D, who responds by taking off on his motorcycle, almost hitting the two in the process.

Franklin and Lamar quickly get back into Lamar's van and start chasing after D. Franklin is doubtful about catching up with the speeding motorcyclist. After chasing through the Simmet Alley, D is hit by a bus, throwing him off the bike. He then runs off through a city bus terminal. Franklin and Chop jump out the van and the chase ensues on foot.

The chase continues into a railyard. Franklin loses the trail and the player is prompted to take control of Chop to sniff out D. During the search, Chop suddenly runs off across a nearby street, after having spotted another (male) dog of the same size. Chop begins humping the other dog, much to Franklin's chagrin. Eventually, the two continue their search and find D hiding inside a boxcar. D jumps out and runs off again, but Franklin sends Chop after him. After a short chase Chop manages to bite D, forcing him to the ground.

Franklin apprehends D and Lamar arrives with the van. After being forced into the van, D recognizes Lamar by his voice and the back of his head. Franklin takes the driver's seat and they drive back towards Lamar's house. During the ride, there is a brief conversation about D remembering Lamar and Franklin from when they were younger and Lamar makes a ransom call to the Ballas from his cell phone and demands $40,000 for D. Franklin tells Lamar that the Ballas and the LSPD will be able to trace the cell phone and will know where they are now. Franklin tosses the phone out of the van and forces Lamar to let D go. Franklin then drives to the BJ Smith Recreational Center to drop off Lamar and Chop.

If the player hasn't received a message after Repossession, Lamar will text Franklin that he got a new cell phone and that Stretch will be coming out of prison soon. Later, Lamar will call Franklin letting him know that Chop will stay at Franklin's house.

Follow Lamar.
After the first cutscene, the player has to follow Lamar and Chop to an alley nearby. Franklin and Lamar will talk on the way. There are no destination markers on the map. If the player stops on the way, Lamar will stop, too, and comment about the player not walking where they should. Attracting any police attention during the walk will fail the mission.

Get in the van.
Upon arriving to the alley, the player has to enter Lamar's white Speedo.

Go to Vinewood Boulevard.
Drive to the alley in Vinewood Boulevard which is 1.36mi (2.19km) away from the van's location in Strawberry if following the GPS' legal route. On the way, one of four possible conversations will trigger, depending on the player's actions before the mission.

Get back in the van.
After a short cutscene the player has to chase D, who is on a Bati 801 motorcycle. The player needs to get in the van and then follow D through Los Santos. It is not possible to knock D off his bike or overtake him. If a player achieves to overtake D, his bike will speed up and will be able to very easily push the van out the way should the player stand on his path.

Eventually D will crash at Dashound Bus Center in La Mesa and the player will have to chase him through Mirror Park Rail Yard. The player should be careful at the bus center as there are moving cars and buses which can hit the player. After a short chase through the rail yard, D will hide among the boxcars, leaving Chop to sniff him out.

The same objective will appear if the player leaves the van on the way to Vinewood Boulevard, during the chase, and after kidnapping D.

Open boxcars to see if D is hiding inside.
The player needs to open the first two boxcars to try find D. He will not be in either of them so Chop will continue sniffing out boxcars.

Go to Chop and pull him off the dog.
On the way to the second set of boxcars, Chop will get distracted by another dog. Calling Chop back will not work so the player has to walk over to him and pull him off. Chop will then continue sniffing out boxcars.

Chop will then find three boxcars where D could be hiding. D is hiding in the northernmost boxcar, one at which Chop will be barking. Opening the other two will do nothing, and once the boxcar with D inside opens, the chase will continue. Chop will catch up to D and take him down. The player need to approach D and CHop to continue.

It is possible to switch to Chop and see things from his point of view, but not control him, at any point between D hiding and Franklin approaching D when Chop takes him down.

Take D to Lamar's house.
The player needs to drive Lamar, Chop, and D, to Lamar's house. On the way, Lamar will talk about getting ransom from the Ballas. Lamar will call demanding $40,000 while Franklin worries about being traced since Lamar is calling from a cell phone.

Stop the van to let D out.
The player has to stop the van so D can get out.

Lose the Cops.
If the player refuses to let D out and continues driving, they will receive a two-star Wanted Level. The player will now have to lose the cops before letting D out.

Drop Lamar off at the rec center.
The final drive of the mission, after D is out, the player needs to take Lamar to BJ Smith Recreational Center. The mission end once the player arrives at the destination.

There are no monetary rewards from this mission. Chop will be found at Franklin's house and he can be taken out on walks. Killing Franklin, Lamar, Chop, or D, and destroying the van, at any point will fail the mission.

Franklin hides from his aunt and her friend.

Franklin's Aunt and her friend jogging away.

Franklin's Aunt and her friend stop to talk.

Lamar and Chop arrive for Franklin.

Franklin and Lamar enter the alley.

Franklin and Lamar get spotted by D.

Lamar aims his gun at D.

D grabs the ladders on the side of a fuel carriage.

Humping a dog as Chop.

Putting D in the back of the van.

Driving D back to Franklin's house.

Franklin throwing Lamar's phone out of the window.

D getting thrown out of the back of the van.

Mission Passed.
Add a photo to this gallery 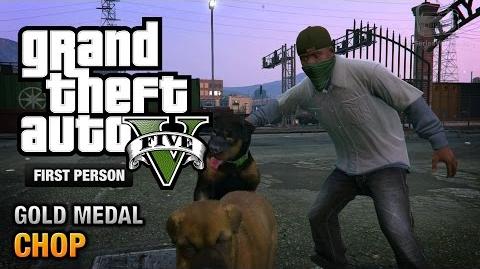 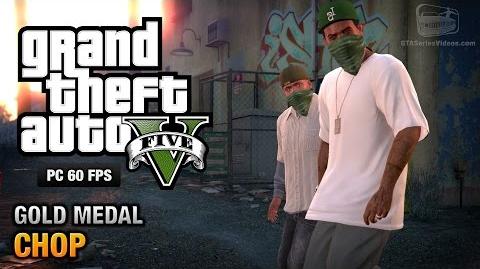 Retrieved from "https://gta.fandom.com/wiki/Chop_(mission)?oldid=1068310"
Community content is available under CC-BY-SA unless otherwise noted.