The Chino is a large 2-door coupé of late 1960's design, very similar to the Virgo released in the previous DLC. Its overall design, especially in the side profile, appears to be derived primarily from a 1966 Lincoln Continental.

The Chino features a grilled front end, dual circular headlights and a chrome bumper, the latter bearing smaller unusable fog lights and the license plate. The hood bears a small Vapid logo on the front and an elevated center running towards the windshield. The sides are distinguished by the chrome elements on the fenders and the bottom, as well as around the windows, the door handles and the square rear-view mirrors. The rear end features twin tail lights surrounded by chrome trims, as well as a chrome bumper bearing the reverse lights and the license plate. Two exhaust pipes can be seen below. The vehicle borrows some of the badges found on the Peyote, while having its own "CHINO" badge, applied to the rear end.

The Chino may appear as a hardtop coupé, but can be customized at Los Santos Customs to remove the roof entirely or replace it with a non-retractable fabric top. It is only available in a single color that is also applied on the interior stitching. It uses a set of custom wired wheels with low-profile tires, whose design is entirely unique compared to the wire-type lowrider rims seen in Los Santos Customs.

Overall, the Chino is a fairly lacking car in terms of performance. It has a low acceleration because of its heavy weight, and the lowest top speed for its class. While the Chino is considered a Muscle car, its engine output is much lower than other cars, making it relatively easy to control and hard to spin out. Handling wise, the Chino is a very well handling Muscle, able to go through most corners without much effort. It still has its bouts of oversteer like any other Muscle, but when the Chino spins out, it is easy to correct. Crash deformation is above average, owing mostly to its large, heavy body which makes it resilient to physical damage and protects the engine sufficiently well. The car's width may prove to be an issue when attempting to cut in between lanes of traffic as it is abnormally wide for a car in general. Overall, the Chino is a good car for cruising around in, but otherwise, is a meager choice for competitive races.

Official screenshot of a modified Chino.

Another official screenshot of the Chino.

Screenshot of the Marksman Pistol, with a Chino in the background. 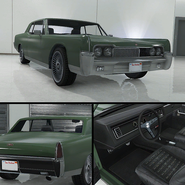 The Chino on Legendary Motorsport in the enhanced version.

The Chino on the updated Rockstar Games Social Club. 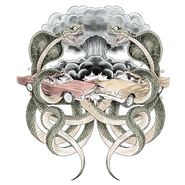 A Chino (left) on a graphic of Serpants of Destrution Tattoo in Grand Theft Auto Online.