GTA Wiki
Register
Don't have an account?
Sign In
Advertisement
in: Missions in The Ballad of Gay Tony, Missions
English

Luis takes out the Triads trying to kill him and Tony.

Tony: "What is wrong with you? I was supposed to be the irrational idiot with anger issues?"
Luis: "I've got anger issues? Okay. The guy threatens to shoot me because I can't arrange a liquor license for him. Please give me a break, T."
―Tony Prince, arguing with Luis Lopez for knocking out Triad 1.

Chinese Takeout is a mission in The Ballad of Gay Tony. It is given by Gay Tony to Luis Lopez.

After the game's introductory mission, Luis receives a text message from Tony to meet him at the Maisonette 9 club. Luis arrives at the club and heads inside, waiting for Tony to conclude a phone conversation. Hereafter, Tony rushes Luis back outside. It appears he needs to be driven to a location in Chinatown, to do business negotiation for Rocco.

Complete the mission in 5:20
Take less than 10% damage
Have 70% accuracy or higher
Only headshots were used to kill the Triads

The player must get into the Schafter and drive over to Chinatown. Tony will give an Assault SMG, which Luis calls some "sci-fi shit". A Chinese mobster is speaking with Billy Grey when Luis arrives at the meeting. After Luis is rather clear that he and Tony aren't patsies to sort out the Chinese character's licensing issue, a gun is drawn. Seemingly in a bind, Luis eventually overpowers the Chinese mobster, kicking the gun out of his hand and sending him into an unconscious swoon on the concrete ground. Unfortunately, a bullet is fired off from the gun, and the noise from the shot has alerted his friends.

The player must then escape the building and kill everyone blocking Luis and Tony's way. Some enemies will have grenadess. There is a Combat Shotgun in one of the unfinished rooms, and some armor in another. The player must reach the bottom floor, get into the car and drive Tony back to his home. The mission will be passed once Tony enters his apartment. 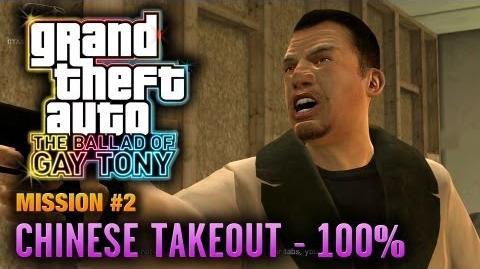