March of the Volunteers

1 October 1949 (as the PRC)
Not to be confused with the Republic of China, commonly refered to as Taiwan.

Wikipedia has an article on:
China

The People's Republic of China is a country located in east Asia. It is the third-largest country in the world and the most populous. It is bordered by Mongolia to the north, Russia and North Korea to the north-east, Vietnam, Laos, Myanmar, India, Bhutan and Nepal to the south, Pakistan to the south-west, and Afghanistan, Tajikistan, Kyrgyzstan and Kazakhstan to the west.

References in the GTA Series 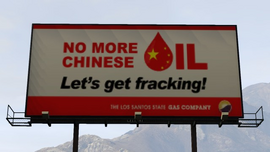 Billboard of The Los Santos State Gas Company supporting the use of fracking and against Chinese oil.