Standard White - 100%
“Sure, the last time you rode a trike you were wearing nothing but a freshly filled diaper, but what's the point of being a man-child if you don't get to regress as far as you want? Besides, those reinforced, deep-tread roadkillers at the back definitely don't look like giant training wheels. Go get 'em tiger.”
— Southern San Andreas Super Autos description.

The Nagasaki Chimera is a tricycle featured in Grand Theft Auto Online as part of the Bikers update.

The vehicle takes the appearance of a tricycle (or as the website description calls it, a trike). The design is purely custom and does not reflect any real-life manufactured tricycle, however, it has similarities to real-world custom tricycles.

The vehicle features large fat tyres on the rear axle and twin springed forks at the front. It also sports a protruding primary drive and the oil tank is mounted at the front of the bike, close to the footpads. The Chimera uses whitewall tires.

Like the Avarus and the Sanctus, the Chimera has a vertically-mounted license plate on the rear left fender.

The Chimera performs very well in terms of speed and cornering. It also performs wheelies extremely well, even pulling back completely will not result the player of falling off of the Chimera. Because of the three-wheeled design, the Chimera has the disadvantage of being wider and heavier than most motorcycles, but makes up for its stability and control over curbs, bumpy roads and uneven terrains.

Mechanically, the Chimera uses a mix of the physics used by motorcycles and ATVs. While this normally is not a problem, this means going off jumps using the Chimera is all but suicidal; due to the odd physics handling, the vehicle is almost completely unable to pitch and roll while in midair. Instead, it will either heavily nosedive after going off a jump or simply remain at the same angle it was at when it lifted off the ground. Thus, taking it to a stunt race or into a mountainous area is ill-advised, lest the player be unable to land properly after going off a jump and getting wasted due to landing wrong. 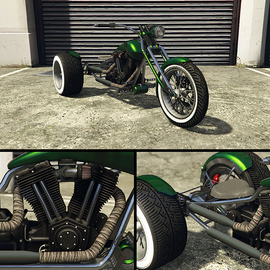 The Chimera on the Rockstar Games Social Club. The Chimera on the updated Rockstar Games Social Club. The Chimera in the cinematic preview on Rockstar Games Social Club.