Chihuahua Hotdogs is a brand of hotdogs featured in the HD Universe.

The company was founded in 1982, according to one of their slogans.

Their logo features a dog (presumably a chihuahua) fashioned as a sausage sandwiched between two hotdog buns.

In Grand Theft Auto IV, Chihuahua Hotdogs vendors can be found through the entire city of Liberty City, one of then, right in front of the Broker Safehouse. They all can be interacted by the player, who can order a hotdog for $5. Eating a hotdog restores the player's health.

In Grand Theft Auto V and Grand Theft Auto Online, Chihuahua Hotdogs vendors can be found at the Pleasure Pier in Del Perro Beach, at the Cine Areola in Vinewood, at the Jetsam Terminal building in Terminal, and in Sandy Shores, but unlike GTA IV, they are no longer interactive.

There are two Chihuahua Hotdogs restaurants in Los Santos, the first one located in Pillbox Hill, and the other one in Del Perro. 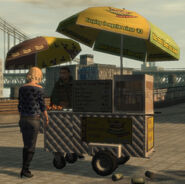 Chihuahua Hotdogs vendors in Sandy Shores, near the Alamo Sea in GTA V.

Chihuahua Hotdogs and Beefy Bills vendors behind the Jetsam Terminal in the Terminal.

Chihuahua Hotdogs at the Cine Areola on Vinewood Boulevard.
Add a photo to this gallery

Retrieved from "https://gta.fandom.com/wiki/Chihuahua_Hotdogs?oldid=1306506"
Community content is available under CC-BY-SA unless otherwise noted.