Standard White - 100%
“This was built for one thing, and one thing only. If you want to get anywhere quickly, you're in the wrong place. If you want to go off-road, look elsewhere. If you want something inconspicuous, move right along. But if your heart's desire is to stay very still while you launch enough heat-seeking missiles to reignite the Cold War, then buckle up. The Chernobog is very, very news indeed
Please note: This vehicle must be stored in a personal facility and can be modified at the Facility Vehicle Workshop.
”
— Warstock Cache & Carry description.

The Chernobog is evidently based on the MAZ-543/7310 artillery truck, specifically the 543M for the similar configuration (albeit replacing the BM-30 Smerch rocket system with a standard box-shaped missile launcher). It is the first vehicle to adopt a 4-axle design.

The design of the truck is very robust and utilitarian, where the front end features a bulky bumper with a number plate and a winching cable on the centre, the latter connected to various hooks beside the plate, while the edges of the bumper house circular fog lamps and turn signals with protective mesh screens. On the upper area, the truck has a large grille with a portable ladder mounted over it, while a set of dual circular headlamps are seen on either side, fitted with what seems to be light covers with rectangular slits (always folded up).

On the frontal section, the cabin area assumes a layout similar to helicopters such as the Akula and the Savage, where the front cab is positioned on the left-hand side of the vehicle and features a single access door and steps on the left, intended for the driver, while the rear cab is taller and features two access doors and ladder steps on either side, intended for a gunner/operator. The rest of the frontal area are occupied by the engine bay, which features a main compartment on top and a smaller hatch on the right side (labeled "Hood" and "Trunk on the Interaction Menu, respectively). There are also side marker lamps on the front quarters and an unusable roof lamp with a protective cage on top of the main cabin. Towards the rear section, the truck has large fuel tanks between the middle axles and interactive stands between each pair of wheels, as well as side marker lamps on the rear quarters and what seems to be folding platforms and ladders for access of the main launcher.

On the rear end, the truck uses a set of circular tail lamps similar to the lamps found on the front bumper, being also three units behind protective mesh screens. The centre of the truck also bears a number plate and a tow hitch similar to the ones on the APC and the Insurgent Pick-Up Custom (although did not serve any purpose until the Southern San Andreas Super Sport Series update, where it is able to tow the Anti-Aircraft Trailer). A large sump guard can be found on the front, almost below the front bumper.

The truck features a worn green interior similar to aircraft like the V-65 Molotok and the RM-10 Bombushka, with the corresponding analogue dials. The rear cabin features a computer that is identical to those used by the Bombushka and the Volatol.

The truck features various red star markings similar to the Molotok and the Akula, denoting its Russian origin. However, the black, red, and gold coloured lines on the sides could also hint at an East German origin. The truck's body and the grilled defences are painted with the primary colour, while the front bumper, rear tow hitch, rims, and launcher tubes are painted with the secondary colour. The truck uses a unique set of industrial rims with circular details on the centre, wrapped in high-profile tyres.

The vehicle is equipped with a large missile battery with 15 tubes, using large missiles with homing capabilities.

The Chernobog has decent speed for a truck of its size and is very maneuverable at low speeds thanks to its all-wheel steering system, but generally has sluggish handling at higher speeds, as it often struggles to drive straight after turning. Its large size and huge weight also ensure that most vehicles hit by the Chernobog will often get crushed and explode causing damage, a problem shared with the Rhino. Also, despite its large size, the Chernobog has exceptional braking, only taking a second or two to come to a complete stop. The ground clearance provides decent capability to sort uneven terrain, though the sheer size may become a problem when passing through areas where sharp turns are required. The Chernobog's durability is above average, as it can take around four direct hits from an explosion before the engine catches fire.

Its notable feature is a "lockdown" mode, where the truck is slightly raised up by the four stands, which enables the rocket system on the back, at the expense of being static, so the driver cannot move the vehicle unless the lockdown mode is deactivated, rendering the missile launcher unusable.

The Chernobog is powered by a large V8 diesel engine, coupled to a 5-speed gearbox in a front engine, all-wheel drive (50% front, 50% rear) layout. Its engine sound is the same used on the Phantom Custom and the Hauler Custom, as well as the TM-02 Khanjali.

The lock-on range of missiles reaches to an excessively high 1000 meter according to the game files (the same as the effective range of Marksman Rifle) and the guidance capability of missiles will even stress experienced pilots in P-996 LAZER. The missiles are more accurate than most, being similar to those fired from the Anti-Aircraft Trailer, able to turn around to pursue aircraft that they missed initially. This makes the Chernobog an excellent anti-air vehicle, but the limited effective angle of the rocket system (at 40-45 degrees) will leave the Chernobog vulnerable if the aircraft is directly above. Aircraft with Chaff countermeasure can easily disrupt the lock-on sequence of the Chernobog, but Flares may not be able to disrupt the five missiles at once (depending of how the operator uses the system). Helicopters and larger planes that lack countermeasures are often incapable of avoiding the missiles due to their range and increased accuracy. The Avenger in particular is vulnerable to these missiles, and a single volley can sometimes blast off elevators, and disable the plane.

It can be noted that the missiles themselves cannot perform quick maneuvers when missing a target, unlike missiles on cars such as the Deluxo and Oppressor. Instead of performing a corner after firing towards a target like standard missiles, the missiles within the tubes seemingly align with the target only after the target has been fully locked on, and once fired, head straight in that direction, regardless of the direction the missile system is pointing. This, together with the relatively poor lock-on time and lack of ability to lock onto low targets means it is ineffective against land vehicles and can sometimes be insufficient in quick situations involving air vehicles. Also, unlike the Deluxo and Oppressor, the accuracy of the missile lock on is severely hindered by props, such as vehicles, light poles and even pedestrians who may get in the way. Despite this, the sheer size and immense speed of the missiles make them a severe threat and sometimes do not require any lock on at all, especially when using the barrage's incredible fire rate to advantage.

Towing an Anti-Aircraft Trailer in collaboration with another player gives the vehicle increased potential, as the trailer turret can provide additional defense when the main vehicle is suppressing enemies. Caution should be taken when carrying the AA trailer, as the Chernobog's weight may destroy the trailer if the driver is not careful when reversing it. The lack of armor often makes the trailer the first vehicle to lose during a combat.

The Chernobog can only be modified at a vehicle workshop inside a facility. 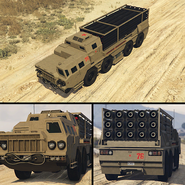 The Chernobog on the updated Rockstar Games Social Club.

The Chernobog in the cinematic preview on Rockstar Games Social Club. 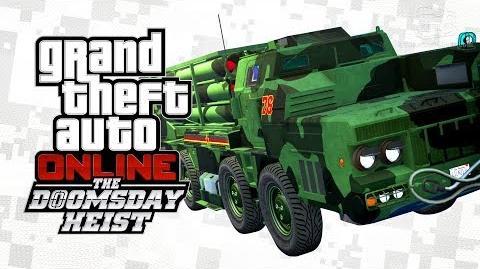