Cherise Glover is a minor character in Grand Theft Auto IV. She was once the girlfriend of Dwayne Forge and later started to date Jayvon Simson, the man who ratted out Dwayne.

While she was hanging out at an arcade in Chinatown with Jayvon, Dwayne sent Niko Bellic to kill Jayvon. There, Niko had the choice to either execute Cherise or let her live. If he'd choose to let her live, she'd become a character he'd meet on the street.

She can be found in front of the Cluckin' Bell, in Northwood.

Through the reunion, Niko learns that Cherise's new boyfriend is beating her. Niko then takes her to the northernmost apartments in Northwood, just a few blocks away from the Cluckin' Bell Niko found her at. Niko approaches Cherise's boyfriend who is in the apartment courtyard. This would be leading to Niko beating and warning him to stay away from Cherise. The player can also choose to kill him, which will lead to Cherise being angry at Niko and she tells him to stay away from her. No matter the situation, she will make no further appearances in the game.

If Dwayne is alive, he calls you soon afterward and jealously asks if Niko and Cherise are seeing each other, to which Niko denies.


- Complained to the LCPD about boyfriends abusing her. 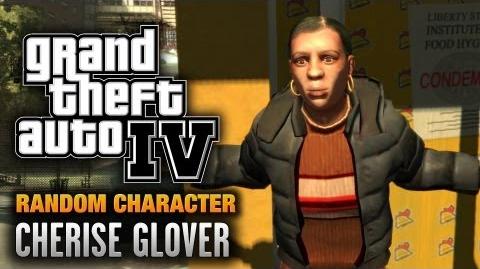