"Warms you to the core"

"The ultimate seduction — Cherenkov martini with the edge of the glass rimmed with cocaine, a joint, a Mollis pill for your little guy."
―Cherenkov Vodka on Bleeter

Cherenkov Vodka is a vodka company featured in the HD Universe of Grand Theft Auto.

Playboy X talks about how he loves Cherenkov Vodka in the mission "Blow Your Cover", as he talks about Russians (assuming that Niko Bellic is Russian). In Broker, there is a building on the eastern side of Iroquois Ave (near Roman's Depot) in Hove Beach appearing to be an old distribution warehouse judging by a sign for Cherenkov Vodka on top of it. The second "E" and the "N" are missing, making the sign spell "Cher Kov", which is meant to be pronounced like 'jerk off', a euphemism for masturbation. Also during the opening cutscene of the mission, "Do You Have Protection?", Mikhail Faustin can be seen drinking Cherenkov Vodka.

In GTA V, Cherenkov Vodka can be found inside 24/7, Limited Service and Rob's Liquor stores.

Cherenkov Vodka exists in 4 variants. What is different about them is not known, except for them being in different coloured branded bottles. The two Cherenkov liveries for the Schlagen GT uses the blue and purple variant colours.

It is a parody of well-known vodka companies Smirnoff and Absolut. 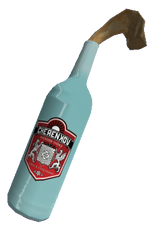 A bottle of Cherenkov Vodka used as a Molotov Cocktail in GTA IV. 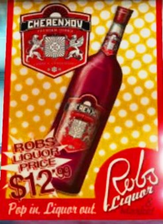 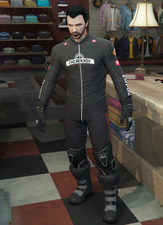 A "Cherenkov Vodka" poster inside the RM-10 Bombushka.

A Cherenkov Mule in GTA IV.

Rear view of the Mule in GTA IV.

The RM-10 Bombushka with Vodka Bomba livery, sporting a Cherenkov emblem and coat of arms.

A V-65 Molotok with a Cherenkov Vodka livery.

Cherenkov Vodka livery for the Cheburek.

A Issi Sport with a Cherenkov Strawberry livery.

A Issi Sport with a Cherenkov Lime livery.
Add a photo to this gallery

Retrieved from "https://gta.fandom.com/wiki/Cherenkov_Vodka?oldid=1256806"
Community content is available under CC-BY-SA unless otherwise noted.