Anthony Cumia (GTA V)[1]
None (GTA Online)
“Shit, Trevor, we ain't got long.”
— Chef to Trevor, before they both get into a shootout with the Aztecas, in Trevor Philips Industries.

Chef meets Trevor at an unknown point before the events of GTA V. During The Paleto Score, Chef says that in his "job interview" he needed to rob a cash for gold guy who was in Sandy Shores, getting $50,000 from the score, and burying (with Trevor) the corpse of the guy and his bodyguards (or what's left of them according to Chef) in a junkyard.

In the mission Meth'd Up the GTA Online Protagonist must take an RV full of meth from the Liquor Ace store in which Chef operates in. Chef attacks as he must defend his "product." Chef will not go down to the car park to defend the RV however; rather he will stay on the rooftop along with some other goons shooting at the player.

The best way to find him is to either go up the stairs to the roof, or to park the RV itself to climb up onto the roof. Chef will be there amongst the other enemies and can easily be eliminated. He also appears in Crank Up the Volume after the player delivers a Journey to the meth lab, he can be seen approaching the RV from the back alley.

He appears at the beginning of the Series A online heist entering in the GTA Online Protagonist's apartment along with Trevor and Ron. He later appears in the Series A - Steal Meth mission, where the players deliver an Tanker full of meth juice that he then uses to create the meth lab in the Liquor Ace gas station.

During a business meeting with the Los Santos Triads, Trevor's meth lab gets raided and attacked by the Aztecas after Trevor attacked one of their members, Ortega, who could've been either killed or spared (player's choice). Chef assists Trevor in fending off the attacking Aztecas and Ortega also, if he was spared.

After the mission Blitz Play, Chef texts Trevor, asking Trevor to contact him if he needs a gunman for any future service for helping out during the attack. Chef will become available as a gunman for the heists. He can be selected in The Paleto Score and The Big Score only.

Chef is a very skilled gunman, with a heist cut of 12%, making him a good choice as an experienced crew member, but still with a reasonable price. He doesn't die in The Paleto Score and is even complimented by Michael, who says, "Hey T, your guy is really good".

In the obvious approach of The Big Score, he will do a good job of being either the first or second gunman, regardless of previous experience, and provides great help in the shootout against the police if he is the second gunman, helping kill a lot of enemies.

In 2021, Chef finds himself in another dispute with The Lost MC over their meth business, so he puts out a contract through KDJ, enlisting the online player to put The Lost MC out of business. After some preparation works, the player launches an attack on four of The Lost's meth labs, destroying them with the explosive stolen from their clubhouse earlier. Once that's accomplished, the player storms The Lost at Stab City and steals their tanker, which they then deliver to Chef. 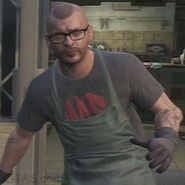 Chef at the Meth Lab in GTA V.

Chef during The Big Score in GTA V (Optional).

Chef and his entourage of rednecks in Meth'd Up in GTA Online.

Chef and his crew after The Lost Contract finale in GTA Online.