Standard White - 100%
“There's a kind of charm that only comes with age, and in today's jaded world nothing's aged better than the Cheetah Classic. It's practical, spacious, understated. It oozes red-blooded panache. You open the door, and you catch the smell of brandy and cigars on its breath. It's eminently respectable, it's constantly groping its secretary, and it doesn't even feel the need to pretend it has friends from minority groups. Welcome to the old world.”

The Grotti Cheetah Classic is a sports car featured in Grand Theft Auto Online as part of the Gunrunning update, released on July 11th, 2017, during the Cheetah Classic Week event.

“If you’ve never been able to decide between vintage vogue and cutting-edge chic, the Grotti Cheetah Classic will let you have it both ways. This beauty has been setting trends and breaking records ever since it rolled off the production line three decades ago, so if you want to ooze class and rocket fuel all at the same time, your number just came up. The Cheetah Classic is now available exclusively at Legendary Motorsport.”

The Cheetah Classic is the older generation of the Cheetah, intended to resemble the 3D Universe renditions of the aforementioned car, given the compact and lightweight design. The front bumper of the car is predominated by the small bottom extender and a thin intake spanning most of the car's width, both of them having a plastic trim, along with a central license plate. The bumper area consists of a rectangular meshed grille and a set of square fog lamps, with the latter having black trim around them. On the bonnet area, there is the Grotti emblem on the centre and two pop-up headlamps on the outer edges, each one consisting of dual square lamps. On the bonnet itself, a vent is found by stock, appearing as a rather large grated metal plate laid across the bonnet with a plastic surrounding. Directly behind it there is the radiator heat vent, which would allow hot air to exit the vehicle.

The side profile is most prominent for its dual side intakes, which allow airflow to reach both the rear brakes, and the engine intake manifolds for intake air, and for cooling purposes. Small "GROTTI" word marks are found on the black plastic skirts, which matches the Cheetah's side word marks which are found behind the front arches. The greenhouse area follows a similar profile to that of the Turismo Classic, although the rear-quarter windows are aligned with the rest of the cabin and the rear section has a vertical rear window, along with black engine louvers which are separated into separate sections, which would ideally allow air to release from each side of the engine, conforming with the intakes found on either side of the engine bay. A set of mirror wings can be seen on the doors.

The rear of the car follows a similar pattern to that of the 3D Universe renditions of the Cheetah, featuring a small lip on the upper side and a vented end holding the manufacturer insignia on the centre and dual circular tail lamps on either side, with the outer ones having outer turn signals and inner reverse lights. Each section below the tail lamps have the corresponding word marks, with the "GROTTI" one on the driver side and the "CHEETAH" one on the passenger side. A bumper spans the whole width of the car, featuring exit vents on the outer edges, mouldings for the dual-exit, dual exhaust tubes and a grilled section on the centre. A license plate can be also seen on the central portion of the car, right over the separation of the bumper and the rear body.

Its interior is very similar to that of the Turismo Classic, featuring white stitched trim around the console's dial cluster and a "GROTTI" mark on the passenger side. However, the central console appears to be wider and the seam for the glove compartment is absent. The central section also has fewer components beside the gear stick.

The primary colour of the car is applied on the bodywork, while the secondary colour is applied in the form of a wide stripe passing through the front, the bonnet and the roof. Similar to the Turismo Classic, a trim colour is also available for the interior. It uses a unique set of six-spoke rims wrapped in low-profile tyres.

As expected, the Cheetah Classic is one of the best of its class, being on par with the Turismo Classic. It is safe to say in most Sports Classics races, one can choose between these two vehicles on their personal preference. As the Turismo Classic's biggest competition, the car also sports a V12 engine, outputting considerable amount of power at the rear wheels. Opposing to vehicles like the Infernus Classic, the Cheetah Classic has better traction, thereby reducing the likelihood of spinning out in corners, even in the inexperienced's hands. The braking also performs well, giving the driver enough window to react to a sudden event or turning before a catastrophic crash. All in all, the Cheetah Classic is not only good for casual driving, but also ideal for professional race tracks.

Its engine sound is rather unique, appearing to be a lower-pitched variation of the one used in the Stinger and Stinger GT, but with additional engine notes that are more noticeable on higher revs.

Promotional advertisement of the Cheetah Classic. 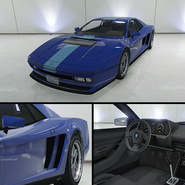 The Cheetah Classic on Legendary Motorsport.

The Cheetah Classic on the Rockstar Games Social Club.

The Cheetah Classic on the updated Rockstar Games Social Club.

The Cheetah Classic in the cinematic preview on Rockstar Games Social Club. 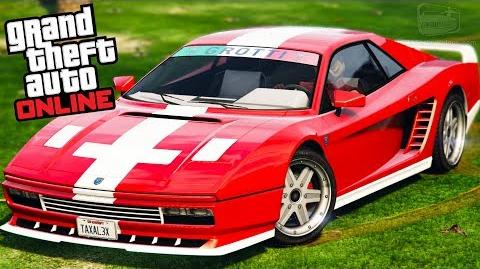